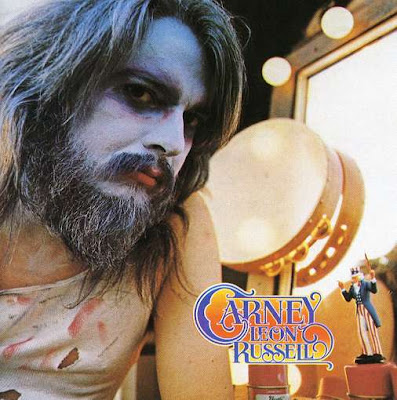 Give it up for Leon Russell! He played on The Byrds' "Mr Tambourine Man", Herb Alpert's "A Taste of Honey", Bob Dylan's "Watching The River Flow",  organised the backing band for Joe Cocker's Mad Dogs and Englishmen Tour, toured with The Rolling Stones and played at George Harrison's Concert for Bangla Desh.

Then in June of 1972, he released Carny, a #2 Billboard album that sold a million copies thanks to the Top 20 single "Tight Rope". Carny is far from a perfect album. (If "Acid Annapolis" comes on  while your iPod is in shuffle mode, I just hope you're not walking by yourself in the dark) But there are some great moments including "This Masquerade", which won George Benson a Grammy four years later, and our favorite  deep cut: "If The Shoe Fits".


Sung from the point of view of one of those thousands of hangers-on/ groupies Russell must have met. Among the song's classic lines :

Can you do a benefit? Have you got any shit?
Have you made your peace with Jesus yet today?
Would you like to be a monk? C'mon, lets go get drunk.
Do you think Paul McCartney is okay?
Can we crash here for just a few days?
We're from Rolling Stone, so it's okay.

Russell's recording career didn't flourish for much longer but his friendship with Elton John resulted in a recent comeback that made a very fine story on CBS This Morning: