Death of a Cosmic Dancer 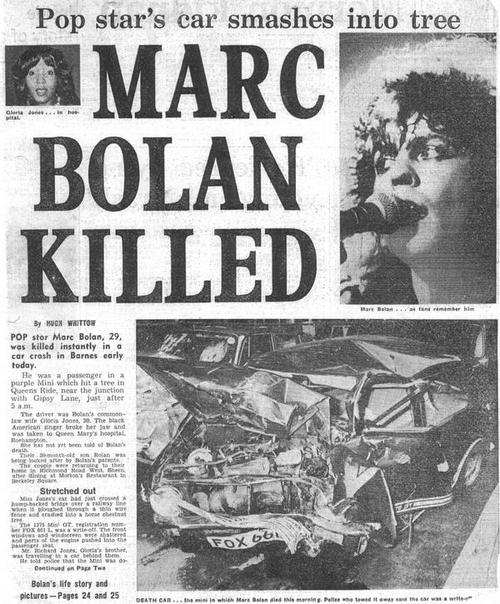 In the early morning hours of September 16, 1977 , T.Rex star Marc Bolan was killed when the car his wife Gloria Jones was driving slammed into a sycamore tree. The self-titled "elder statesman of punk" had re-energized his career in 1977, touring with The Damned in March and hosting a TV show, Marc, on Granada Television. He was 29 years old.

He ended each show with the line "Keep a little Marc in your heart. See you next week, same Marc time, same Marc channel". 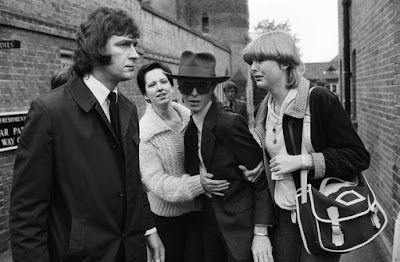 Bolan's funeral was attended by David Bowie, Rod Stewart, Tony Visconti, and Steve Harley.  A swan-shaped floral tribute was displayed outside the service in recognition of his breakthrough hit single "Ride a White Swan".

Notably absent from the funeral was Marc's common law wife who was still in hospital, with her jaw wired shut and a cast on a leg. It wasn't until the day of the funeral that her brother told her her about Marc's death. She would move back to the U.S. with their son.

Marc never got his own drivers license. He told friends he was afraid he'd die in a car accident. On tour in 1967 he told his manager Simon Napier-Bell. “Of course, I’d have to die in a car crash like James Dean or Eddie Cochran then my records would sell much more.”
“In a Rolls-Royce?” Napier-Bell asked.
“No,” he replied, “in a Mini.”

It was the car's passenger side that took the brunt of the impact, killing Marc instantly as it tossed him into the back seat of the little car.

There are many hip Americans who still haven't heard of T.Rex. My introduction was the song "Jeepster", which Martin Scorsese used in his film Alice Doesn't Live Here Anymore. That led me to ignore the Rolling Stone Record Guide's three star review when I found Electric Warrior in a used record store. It has been one of my favorite albums ever since.

After Electric Warrior, I travelled backwards in time to pick up a cut out record featuring older T.Rex tunes like "Debora", "Salamanda Palaganda" and "Ride a White Swan". 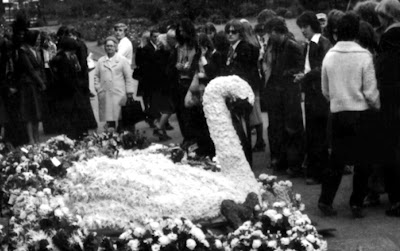 Eventually I bought The Slider, probably thanks to Lloyd Cole's indulgence in covering the tunes for B sides. 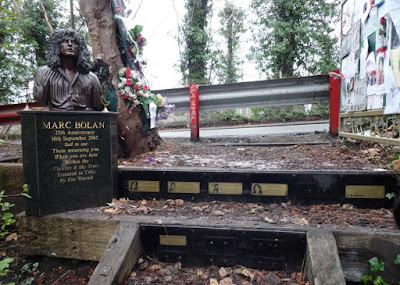