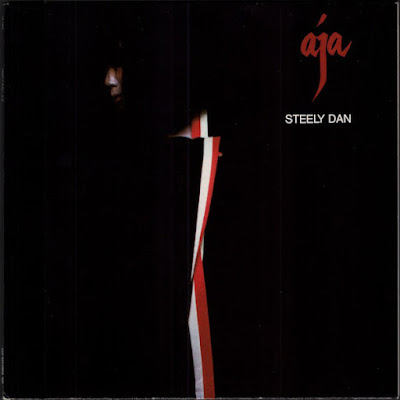 On September 23, 1977 Steely Dan released Aja, the very apex of studio crafted rock perfection; the height of jazz/rock fusion (even if that jazz veers more towards something you'd hear in a lounge rather than at the Village Vanguard.) With the help of nearly 40 musicians, Donald Fagen and the recently passed Walter Becker now come across as older, wiser beatniks without losing their sarcasm, sense of humor or warmth.

Among the album's fans was Ian Dury who said "Well, Aja's got a sound that lifts your heart up.. and it's the most consistent up-full, heart-warming.. even though, it is a classic LA kinda sound. You wouldn't think it was recorded anywhere else in the world. It's got California through its blood, even though they are boys from New York... It's a record that sends my spirits up, and really when I listen to music, really that's what I want."

From Robert Christgau's B+ review:

Carola suggests that by now they realize they'll never get out of El Lay, so they've elected to sing in their chains like the sea. After all, to a certain kind of reclusive aesthete, well-crafted West Coast studio jazz is as beautiful as anything else, right? Only I'm no recluse. I hated this record for quite a while before I realized that, unlike The Royal Scam, it was stretching me some; I still find the solo licks of Larry Carlton, Victor Feldman, et al. too fucking tasty, but at least in this context they mean something. I'm also grateful to find Fagen and Becker's collegiate cynicism in decline; not only is "Deacon Blues" one of their strongest songs ever, it's also one of their warmest. Now if only they'd rhymed "I cried when I wrote this song" with "Sue me if I play it wrong," instead of "Sue me if I play too long." Preferring long to wrong could turn into their fatal flaw

Aja is the third Steely Dan album since songwriters Walter Becker and Donald Fagen discarded a fixed-band format in late 1974. Since then they have declined to venture beyond the insular comfort of L.A. studios, recording their compositions with a loose network of session musicians. As a result, the conceptual framework of their music has shifted from the pretext of rock and roll toward a smoother, awesomely clean and calculated mutation of various rock, pop and jazz idioms. Their lyrics... remain as pleasantly obtuse and cynical as ever.

Aja will continue to fuel the argument by rock purists that Steely Dan's music is soulless, and by its calculated nature antithetical to what rock should be. But this is in many ways irrelevant to a final evaluation of this band, the only group around with no conceptual antecedent from the Sixties. Steely Dan's six albums contain some of the few important stylistic innovations in pop music in the past decade. By returning to swing and early be-bop for inspiration -- before jazz diverged totally from established conventions of pop-song structure -- Fagen and Becker have overcome the amorphous quality that has plagued most other jazz-rock fusion attempts.

"Peg" and "Josie" illustrate this perfectly: tight, modal tunes with good hooks in the choruses, solid beats with intricate counter rhythms and brilliantly concise guitar solos. Like most of the rest of Aja, these songs are filled out with complex horn charts, synthesizers and lush background vocals that flirt with schmaltzy L.A. jazz riffs. When topped by Fagen's singing, they sound like production numbers from an absurdist musical comedy.

The title cut is the one song on Aja that shows real growth in Becker's and Fagen's songwriting capabilities and departs from their previous work. It is the longest song they've recorded, but it fragilely holds our attention with vaguely Oriental instrumental flourishes and lyric references interwoven with an opiated jazz flux. "Aja" may prove to be the farthest Becker and Fagen can take certain elements of their musical ambition.


The last album, The Royal Scam, was the closest thing to a "concept" album Steely Dan has done, an attempt to return musically to New York City, with both a raunchier production quality and a fascination with grim social realism. The farthest Aja strays from the minor joys and tribulations of the good life in L.A. are the dreamy title cut and "Josie," which hints ominously about a friendly welcome-home gang-bang. The melodramatic "Black Cow" is about love replaced by repulsion for a woman who starts getting too strung out on downers and messing around with other men. "Deacon Blues" (a thematic continuation of "Fire in the Hole" and "Any World") exemplifies this album's mood: resignation to the L.A. musician's lifestyle, in which one must "crawl like a viper through these suburban streets" yet "make it my home sweet home." The title and first lines of "Home at Last" (presumably a clever interpretation of Homer's Odyssey -- I don't get it) put it right up front: "I know this superhighway/This bright familiar sun/I guess that I'm the lucky one."

More than any of Steely Dan's previous albums (with the possible exception of Katy Lied), Aja exhibits a carefully manipulated isolation from its audience, with no pretense of embracing it. What underlies Steely Dan's music -- and may, with this album, be showing its limitations -- is its extreme intellectual self-consciousness, both in music and lyrics. Given the nature of these times, this may be precisely the quality that makes Walter Becker and Donald Fagen the perfect musical antiheroes for the Seventies.