In The Naughty, Naked Nude 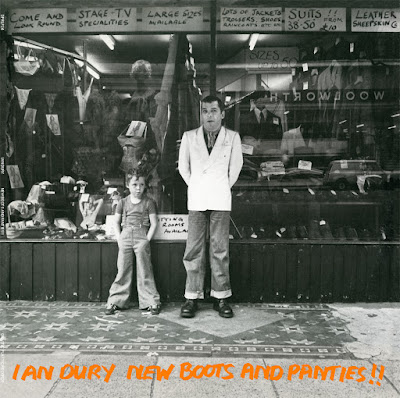 Ian Dury : Wake Up and Make Love to Me

We end a look back at one of the greatest months in rock history with yet another monumental work of art. On September 30, 1977 Ian Dury released his debut album New Boots And Panties!!, a collection of profane and profound tunes with some seriously funky backing by a band led by keyboard player Chaz Jankel. You could get tired of Dury's bawdy lyrics and Cockney rhyming slang and still find yourself looking forward to the next track because of the fresh sound of the record. 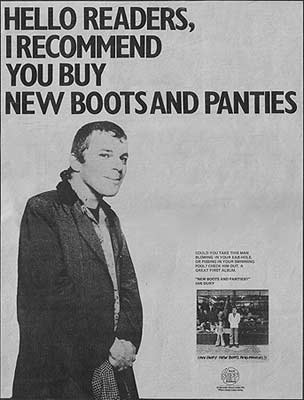 The critics immediately praised the album, including Roy Carr of NME who wrote:

.. it's impossible to bag Ian Dury, except to say that he has taken the essence of the Cockney music hall and utilised rock as a contemporary means of expression. On occasions, Ray Davies has dallied with a similar approach, but Dury has none of the self-conscious pretentions that Davies exposed in his flawed Flash Harry caricature. Ian Dury feels no need to adopt a transatlantic voice to comply with his subject matter, preferring to deliver ribald and bittersweet monologues in the tone of voice he was born with ... Whether or not you buy New Boots and Panties at least make hearing the album a priority. It's your loss if you pass.

Robert Christgau gave the album an A - grade writing :

Dury is a pub rock survivor, as tough and homely as a dandelion, as English as music halls, billingsgate, and Gene Vincent. The tenacious wit and accuracy of his lyrics betray how uncommon he believes his blockheaded protagonists really are, and his music rocks out in the traditional blues-based grooves without kissing the past's ass. Tender, furious, sexy, eccentric, surprising. 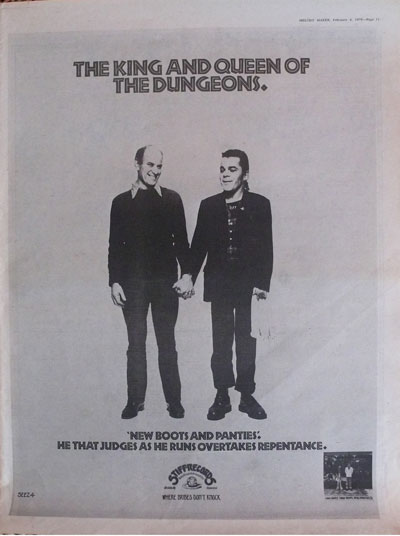 New Boots and Panties!! was ranked at number 2 in the NME writers' list of the albums of the year for 1977 and at number 7 by the writers of Sounds. All recent releases contain "Sex And Drugs And Rock And Roll", though the original pressings did not.