You're My Guitar Hero 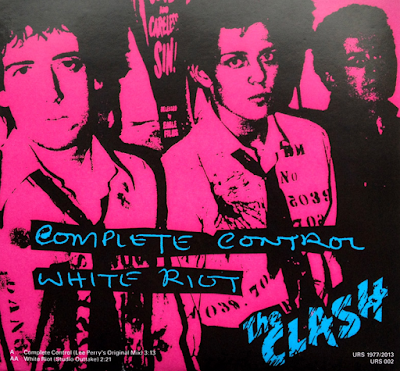 On September 23, 1977 The Clash released the single "Complete Control", an angry response to their record label CBS releasing "Remote Control" as a single without the band's permission:

They said release 'Remote Control'
But we didn't want it on the label
They said, "Fly to Amsterdam"
The people laughed but the press went mad
Ooh ooh ooh someone's really smart
Ooh ooh ooh complete control, that's a laugh

Most bands had some line like "complete artistic control" in their record contract, but as The Clash learned, there was no way to enforce such a thing. Maybe, in retrospect,  signing with CBS was not the most "punk" thing they could have done.

One of the 77's greatest musical moments happens into the song when Joe Strummer cheers on Mick Jones's solo with the line "You're my guitar hero!". The first Clash song to feature new drummer Nicky "Topper" Headon, it was originally recorded with reggae great Lee "Scratch " Perry at the console.

The single peaked at #28 in the UK and was included on the US version of the debut album.