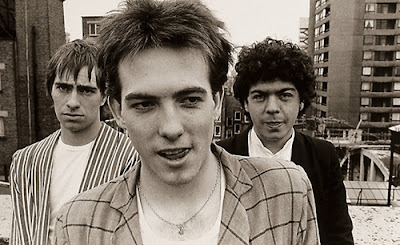 On July 21, 1978 a four song demo by The Cure reached Polydor Records' Chris Parry who heard something Phonogram and Island Records did not. Two of the songs on that demo are now classics : "Boys Don't Cry" ( Robert Smith's attempt at writing a classic 60's style pop song) and "10:15 Saturday Night", written when Smith was 16.

"'10.15 Saturday Night' was written at the table in our kitchen, watching the tap dripping, feeling utterly morose, drinking my dad's home-made beer. My evening had fallen apart and I was back at home feeling vert sorry for myself," wrote Smith in liner notes for the 2005 reissue of Three Imaginary Boys.


Parry had missed out on signing The Sex Pistols and The Clash, but he did get The Jam. Now another three piece had caught his attention, especially the song about sitting in the kitchen sink:

"My reaction was it had mood, it was atmospheric and I liked it."

He would sign The Cure to his newly created Fiction label.