Howard the Duck and Mr Stress 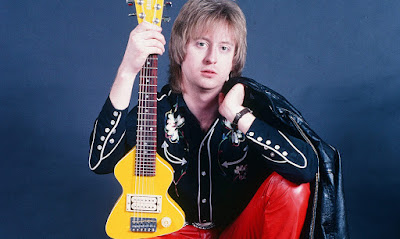 By July 24, 1978 guitar virtuoso James Honeyman-Scott had joined The Pretenders. "As soon as I heard Jimmy Scott, I knew I was getting close," said Chrissie Hynde. " Jimmy and I turned out to have a genuine musical affinity".

Honeyman-Scott could play anything. His solo on "Tattooed Love Boys" from the band's debut album tells the history of rock guitar. The band spent an enormous amount of time together in the early days.

"We did lots of rehearsing - seven days a week, all hours of the day and night. At first a lot of the licks were very heavy - like 'Up the Neck' started off as a reggae song. I said, 'Let's speed it up,' and put in that little guitar run. The melodic parts of the numbers really all started coming together by me putting in these little runs and licks. And then Chrissie started to like pop music, and that's why she started writing things like 'Kid'".

The band didn't even have a name when Honeyman-Scott joined Hynde, fellow Herefordian Pete Farndon  and a session drummer at Regent Park studios in London for demo sessions that included "Precious", "The Phone Call",  and a version of "Stop Your Sobbing " ( a Kinks cover) that attracts the attention of Nick Lowe who agrees to produce the band's first single, "Stop Your Sobbing" b/w "The Wait" on Real Records.

It would make the U.K. Top 40 in early 1979 sending The Pretenders ( named for the Platters song "The Great Pretender")  on their way.