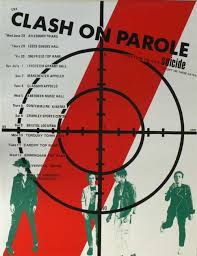 During the Summer of '78, New York City art rockers Suicide toured Europe and the UK with The Clash, and in some cases, Elvis Costello.  The often confrontational duo, which specialized in Martin Rev's electronic noise and Alan Vega's distorted yelping vocals, expected to be well received but was often met with hostility. Especially at the Ancienne Belgique in Brussels on June 16.

“The audience just flipped out and started throwing stuff,” Rev tells The Guardian. “I felt something hit me, I looked down and someone had taken off their boot and thrown it. After that, it was like going into the trenches.”

Both the band and the audience engaged in open hostility, all recorded. Eight minutes into the gig Vega is yelling “I hate your fucking guts”. Then someone steals his microphone. The crowd is chanting "Elvis! Elvis! Elvis!" for Elvis Costello who is headlining that particular show.

At the 23 minute mark, Suicide finally abandons the stage to cheers. When an angry Costello doesn't return for a encore, the crowd goes manic. Police storm the club and discharge tear gas.

“Every night was like Brussels, and a lot of them were worse,” Rev remembered.

U.K. Fans of The Clash threw ashtrays, shoes, coins and beer glasses, but the duo stayed on stage, standing up against the hostile crowd.

“Performing can often give you a false sense of power and strength,” Rev says of those days. “Even when you have two or three thousand people wanting to string you up alive, I still felt like I could have taken them all on with one hand.”
at 2:00 AM