He Must Be Happy 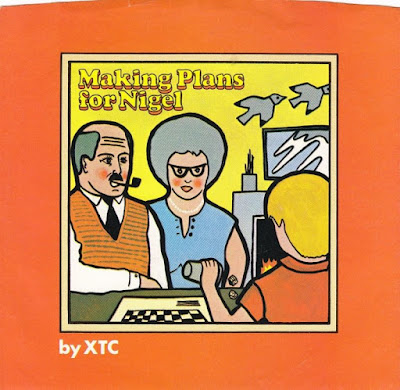 In September of 1979 XTC released their breakthrough single "Making Plans for Nigel", a top 20 hit. The single was released in a glossy sleeve that folds out into a board game, though nobody but Andy Partridge seemed to know how to play the game. "You play the game using the snakes and ladders principle," he told Smash Hits. "You need to throw or spin the exact number to finish. ..and remember if your parents try to squeeze you into a mould that you don't fit, fight it. ( I did...look what happened to me)."

It was Colin Moulding who wrote the song:

I didn't know where it came from. That phrase popped into my head, and one line followed another. Before I knew it, I'd written three parts of the song, and the rest of it just kind of fell in line probably a day or two later. ... When I was about 16, my father wanted me to stay on in school. But by that time, I really didn't want to do anything other than music, I think. ... So, in a way, is it autobiographical? Well, a little bit. I knew somebody called Nigel at school. But I think that, when you write songs, it's a lot of things all wrapped up, like in your dreams. Your dreams are kind of bits and pieces of all the walks of life you've been in. ...

We used to rehearse about two or three times a week with the band, and I'd take songs to rehearsal, you know? This one seemed to get a favorable response. But at that time, I didn't really have enough confidence in myself to know where I was going with the arrangement. The other guys helped me on that, I suppose