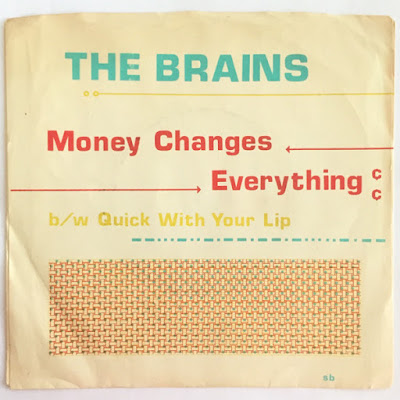 The Brains : Money Changes Everything

When "Money Changes Everything " by The Brains made the Village Voice Pazz and Jop Critic's singles poll, tying The Flying Lizards' "Money" at #9, producer Steve Lillywhite added the band to his list of projects following XTC's Drums and Wires and the Psychedelic Furs' debut.

Big things were expected. Critic Greil Marcus, listing it at number 10 of his Real-Life Rock Top Ten 1979, said, "Singer Tom Gray told his story in a strangled voice, as if he were trying to explain, but instead he laid a curse. This damned single ranks higher than I've placed it, but if it were anywhere else I couldn't end with it, and there's no other way the decade could end. "

The self-titled debut album would get critical praise in 1980 though it has been lost among all the faceless new wave rock albums that came out around then.

The version of "Money Changes Everything" the world knows is Cyndi Lauper's. It was the fifth single from 1983's She's So Unusual and charted at US#27 and #3 in Chile!!

Labels: 1979, Money Changes Everything, The Brains