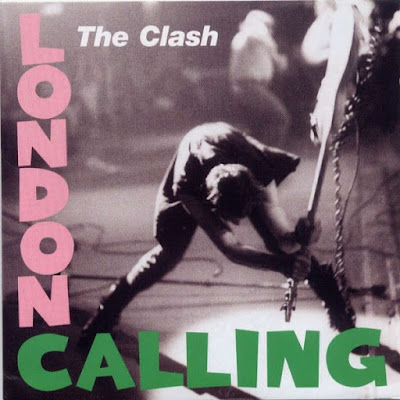 The Clash : The Right Profile

On December 14, 1979 The Clash released London Calling in the U.K. Joe Strummer  was excited, telling a Smash Hits reporter

"We're still digging our reggae ditch but what we've added to that is Motown. It's that kind of thing, but as a simple four piece group plus two tablespoons of organ and half a pint of horn. To me, it's a feeling that just comes out naturally, so you try to choke it off a bit and tense it up so it comes out sounding ever harder.
"To me, music is a feeling, the best there is. The reason I'm in it is 'cause I believe we can get the best feelings and I believe in the people I work with "

That's not how the band felt each other before they began recording. But thanks to the busy routine of two sessions a day, broken up by a soccer game and a jaunt to the pub, The Clash came into their own.

London Calling , priced as a single album, wouldn't reach US shores until January which is why the same album has topped both Best Album of the 70's and Best Album of the 80's polls. It's certainly one of my all time favorites, a synthesis of the band's punk rock roots, reggae, rockabilly and New Orleans R +B. In the Spring of 1980 I would put together The Geeks, a punk rock band, at my boarding school and Vince Taylor's "Brand New Cadillac" would be the second song in our set.

This was the first song the Clash recorded for London Calling, a number the band would warm up with in the studio. Like many songs on the album, it was recorded live. “Vince Taylor was the beginning of British rock and roll,” said Strummer. “Before him there was nothing. He was a miracle.”

There was another miracle involved in the recordings, producer Guy Stevens. Strummer called the wild man who gave both Procol Harum and Mott the Hoople their names "the ultimate cure for musical constipation". The antics of Stevens are legendary: knocking over a mountain of chairs, swinging a ladder at Jones during a solo and pouring beer into a piano. 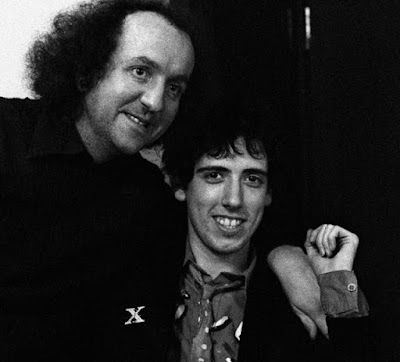 “Guy is that private thing called an X-factor,” said Strummer in a Record Collector article. “He comes in and grabs me by the throat and says, ‘I deal with emotions,’ and that’s it. He doesn’t deal with knobs or whatever producers deal with. He understands the spontaneity of the moment; priceless. If you can get that moment when you play a song just so in front of a tape machine, you got a million dollars. He understands that.”

Stevens would die in 1981 of an overdose of prescription drugs.

The fight or flight adrenaline rush helped The Clash get its mojo back. London Calling is a double album jammed with great songs. "Lost in the Supermarket" was written by Strummer imagining what life must have been like for Mick Jones to grow up in a basement apartment with his mother and grandmother. Strummer was reading newspapers and listening to the radio all the time. "Spanish Bombs" contrasts the country's tourism trade with its civil war 40 years earlier, sending the band's most dedicated fans to the history books.

There are also the songs that must be played at the highest possible volume: "Clampdown", "Four Horsemen", "Death or Glory". In his 1980 review, Rolling Stone's Tom Carson called the latter the "pivotal song on London Calling":

Over a harsh and stormy guitar riff, lead singer Joe Strummer offers a grim litany of failure. Then his cohort, Mick Jones, steps forward to drive what appears to be the final nail into the coffin. “Death or glory,” he bitterly announces, “become just another story.”...But (it) reverses itself midway. After Jones’ last, anguished cry drops off into silence, the music seems to scatter from the echo of his words. Strummer reenters, quiet and undramatic, talking almost to himself at first and not much caring if anyone else is listening. “We’re gonna march a long way,” he whispers. “Gonna fight — a long time.” The guitars, distant as bugles on some faraway plain, begin to rally. The drums collect into a beat, and Strummer slowly picks up strength and authority as he sings:

The band races back to the firing line, and when the singers go surging into the final chorus of “Death or glory…just another story,” you know what they’re really saying: like hell it is!

The critics were taken by the album. Even the most dense and contrary knew a masterpiece when they heard it. Robert Christgau gave London Calling the ultra-rare grade of A+, writing:

Here's where they start showing off. If "Lost in the Supermarket," for instance, is just another alienated-consumption song, it leaps instantly to the head of the genre on the empathy of Mick Jones's vocal. And so it goes. Complaints about "slick" production are absurd--Guy Stevens slick?--and insofar as the purity of the guitar attack is impinged upon by brass, pianner, and shuffle, this is an expansion, not a compromise. A gratifyingly loose Joe Strummer makes virtuoso use of his four-note range, and Paul Simonon has obviously been studying his reggae records. Warm, angry, and thoughtful, confident, melodic, and hard-rocking, this is the best double-LP since Exile on Main Street. And it's selling for about $7.50