Waiting for Help From Above 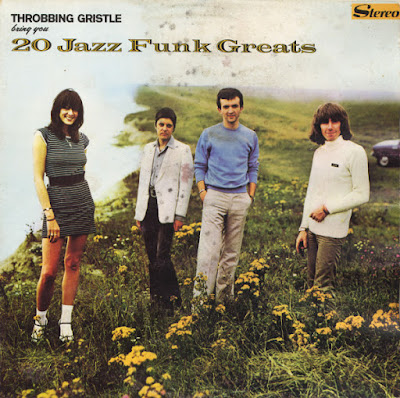 Throbbing Gristle : Hot On The Heels of Love

In December of 1979 the British Industrial music group Throbbing Gristle released 20 Jazz Funk Greats, an album that consisted of 13 tracks that were anything but jazz funk. Unless you knew who Throbbing Gristle were, you'd have no idea what you'd be buying and that was part of the point, says Cosi Fanni Tuttu:

We did the cover so it was a pastiche of something you would find in a Woolworth’s bargain bin. We took the photograph at the most famous suicide spot in England, called Beachy Head. So, the picture is not what it seems, it is not so nicey nicey at all, and neither is the music once you take it home and buy it. We had this idea in mind that someone quite innocently would come along to a record store and see [the record] and think they would be getting 20 really good jazz/funk greats, and then they would put it on at home and they would just get decimated.

What shoppers got instead is an album featuring lyrics like “I’ve got a little biscuit tin/To keep your panties in/Soiled panties”. Pitchfork voted the best industrial album of all time. Brandon Stosuy writes:

Just as the listener is getting used to living in Jazz Funk’s disemboweled music box, the band serves up the shiny, thumping electro disco of “Hot on the Heels of Love,” anchored in Fanni Tutti’s breathy whispers, a dance-floor snare, and delicate vibraphone notes. They founded their own world—creating a cracked framework for industrial music, populating it with their own squalor and later side projects, and then tearing it apart with a smile.