Madness takes the night boat to the UK Top 10 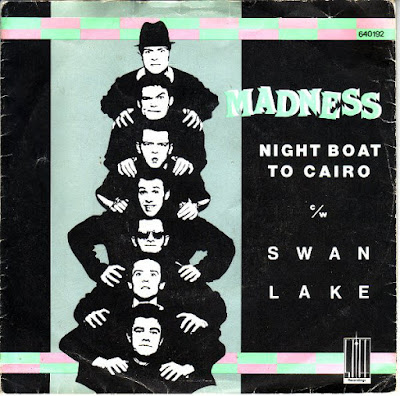 On March 30, 1980 Madness' Work Rest and Play EP entered the UK charts at #14, buoyed by the radio play of a remixed version of  "Night Boat to Cairo". It would peak at UK#6. The song was originally intended to be a instrumental but Suggs had come up with some lines to sing in the middle.

There is a story about the video:

In the Madness Information Service (MIS) fanzine, Chris Foreman (Chrissie Boy) said: "During the filming we had an idea that was used a lot... basically slowing down the music and film so that when you run it at normal speed we all tended to move in slow motion which nullified the effect. At the end Bedders hams it up as the thirsty soldier and gets a playful prod in the behind. 'Who was it?' He said half serious. No-one owned up.