Elvis Costello unleashes a frantic tribute to American soul with Get Happy!! 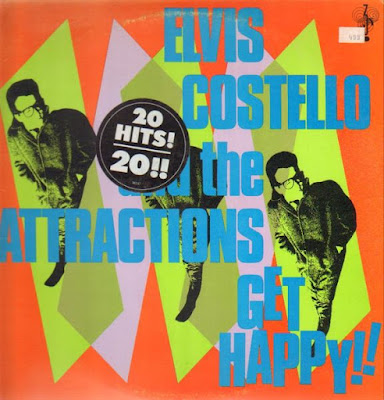 Elvis Costello and the Attractions : 5ive Gears in Reverse

On February 15, 1980 Elvis Costello and the Attractions released Get Happy!!, a 20 track album inspired by 60's soul music that arrived nine months after Costello called Ray Charles a "blind, ignorant nigger" in a hotel bar argument with Stephen Stills and Bonnie Bramlett. Though critics were quick to point out the timing, Costello said in the liner notes of the 2003 version of Get Happy!! the album is no act of contrition:

It might have been tempting to claim that I had some noble motive in basing this record on the music that I had admired and learned from prior to my brush with infamy. But if I was trying to pay respects and make such amends, I doubt if pride would have allowed me to express that thought after I had made my rather contrived explanation ... I simply went back to work and relied on instinct, curiosity, and enduring musical passions.

Among Costello's enduring musical passions is American soul music. Before the band began recording in The Netherlands, he wanted to abandon the "new wave" sound for something else: Again from his liner notes:

I had begun listening again to the R'n'B records, filling in the gaps between the compilations of my teenage years, Atlantic's This Is Soul and Motown Chartbusters Vol. 3, with stacks of Stax singles purchased in Camden Town. The first trips to America had yielded still more riches: whole albums by someone like Garnet Mimms, who had previously only been the name on a single track of a "various artists" collection. Drawing on all of these sources, we set about re-arranging the songs using an R'n'B motor.

Fans can play spot the influences are just let Costello spell them out:

We made a pretty good job of lifting the main figure of Booker T. and the MGs' "Time Is Tight" for "Temptation," while the guitar part of "King Horse" alluded to The Four Tops' "Reach Out (I'll Be There)." Even the lyrics drew on these influences. The opening line of "High Fidelity" quotes a Supremes song, while "Love For Tender" (itself a re-working of the Armed Forces outtake "Clean Money") made use of the same "You Can't Hurry Love" riff that The Jam would take to the top of the UK charts three years later with the vastly superior song, "Town Called Malice."

Only "New Amsterdam" broke away from the formula.

(That) song, about a bewildered new arrival in the New World, proved impossible to improve on the demo rendition captured at Archipelago Studios a ₤15 per hour recording facility in Pimlico, London, and on which I played all the instruments.

I had a bit of a Twitter back and forth with Bebe Buell and came away with the impression that there are a few songs about her affair with Costello. There is certainly a female object of obsession  that keeps popping up in these songs.

From Bebe:
Of course- there are so many rumors out there- including some started by EC himself. I NEVER thought or claimed that any of the songs on This Year's Model or Armed Forces held me as the subject. Anything after that? All bets are off! EC is famous for denying!

BeBe:
Now you're on the right path!

The tightly worked pop-song structures on Get Happy!! are built around one instrumental flourish after another, with no context to sustain them. Yet the effect isn’t slick. Instead, this method makes the music sound raw, urgent and all the more driven, because there’s nothing underneath it. Costello doesn’t give himself time to linger over any of these numbers: they’re jotted down in haste, each of them no more than just another fix on his obsession. If this one doesn’t capture her, he figures, maybe the next one will. He is, of course, fortunate in having a band that not only can keep up with him but give him a run for his money. The Attractions were one of the best backup groups in the world on This Year’s Model, and since then they’ve gotten better.

In its year-end list, the NME named Get Happy!! the second best album of 1980, while the album placed seventh on The Village Voice's annual Pazz and Jop music critics' poll