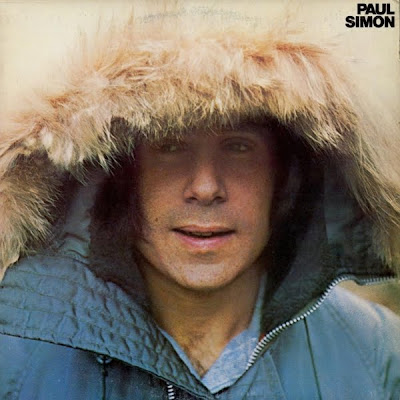 As great a year in music as 1972 was, only three albums received an A+ rating from Robert Christgau, the Dean of Rock Critics: Exile On Main Street, Manfred Mann's Earth Band ( more on this exceptional album in February) and Paul Simon's first solo album since the break-up with Art Garfunkel.

Simon told music journalist Stuart Grundy a lot was riding on the album.

It was dangerous again, to a certain degree, to go and start all over again as just me. I was nervous . . . it's good to be nervous. After all those years of automatic success, you don't get nervous any more. It's really necessary to be nervous and be a little bit frightened.


The album opens with the reggae-ish "Mother And Child Reunion", recorded in Kingston Jamaica with, among others, two members of The Maytals. The title comes from a Chinese dish featuring boiled eggs and chicken. The lyrics--written after the band lay down the tracks--is explained by Simon in a 1972 Rolling Stone interview with Jon Landau

Last summer we had a dog that was run over and killed, and we loved this dog. It was the first death I had ever experienced personally. Nobody in my family died that I felt that. But I felt this loss--one minute there, next minute gone, and then my first thought was, "Oh, man, what if that was Peggy? What if somebody like that died? Death, what is it, I can't get it." And there were lyrics straight out forward like that. "I can't for the life of me remember a sadder day. I just can't believe it's so." Those are the lyrics. The chorus for "Mother and Child Reunion"--well, that's out of the title. Somehow there was a connection between this death and Peggy, and it was like heaven, I don't know what the connection was. Some emotional connection. It didn't matter to me what it was. I just knew it was there

Next comes "Duncan" with the "El Condor Pasa" reminiscent flutes played by the same Andean group Los Incas. (The version above comes from Live Rhymin' and was also one of the tracks on Greatest Hits Etc.)

The entire album could be a textbook for intimate songwriting and may provide some insight into Simon's marriage to his first wife Peggy. The next three songs are "Everything Put Together Falls Apart, "Run That Body Down" ( which can be heard above) and "Armistice Day".
Of "Run That Body Down", a tune that predicts the nation's health craze, Simon told Landau:

Musically it derives from a Bach prelude I was playing, and lyrically it makes it for me because I like the idea of a song about taking care of your health. I was reading a lot of Adelle Davis at the time


Side Two begins with "Me and Julio Down By The Schoolyard", a song that had the whole world asking "What was it that the mama saw these two boys doing?" Simon told Landau:

Something sexual is what I imagine, but when I say "something," I never bothered to figure out what it was. Didn't make any difference to me. First of all, I think it's funny to sing--"Me and Julio." It's very funny to me. And when I started to sing "Me and Julio," I started to laugh, and that's when I decided to make the song called "Me and Julio"; otherwise I wouldn't have made it that. I like the line about the radical priest. I think that's funny to have in a song.

The video, which begins with an introduction by Big Daddy Kane and Biz Markie, was made in 1988.

Of the next song, "Peace Like a River", Simon tells Landau :

It's a serious song, although it's not as down as you think. The last verse is sort of nothing; it sort of puts the thing back up in the air, which is where it should be. You end up, you think about these things that are something to do with a riot, or something in my mind in the city.

As with "Mother And Child Reunion" and "Duncan" Simon finished up the lyrics to "Peace Like A River" after the tracks were laid down.

"Papa Hobo" is next, a satirical put down of a basketball town in the Midwest.


"Paranoia Blues" follows. A study in lyrical story telling from a songwriter who taught his craft at NYU.

Among his students: Maggie and Terre Roche ( who would provide backing vocals on 1973's There Goes Rhymin' Simon before forming The Roches with sister Suzzy) and Melissa Manchester who told Crawdaddy's Timothy White:

One of the most fun things he used to do was tell us stories about all his hassles and paranoias as a successful songwriter and the silly things he'd done. He told us about the first time he ever met Bob Dylan. He said he went over to his house all excited, and the place was a total mess, with junk all over and wrinkled old scraps of paper covering the floors. Dylan kept walking around the room talking and thinking out loud. Paul followed, picking up every loose scrap of paper he could find--anything with words on it--and stuffing them in his pockets. He said he was dying to find out how Dylan did it.

"Congratulations" is the final cut. Another song that shows some wear and tear on a relationship.

I remember seeing Simon tell a late night TV interviewer that his songs typically began with an inspired first line. For his 1972 chord book Simon expands:

Once I pick a key and start to play, I sing any words that come into my head without trying to make any sense out of them. I tend to sing easy words with a concentration on "oos" and "ah" sounds, which are musically pleasing to me. I also like words beginning with "g's" and "l's" and words that have "t's" and "k's" in them. Sometimes during this stream of consciousness singing, a phrase will develop that has a naturalness and a meaning, in which case I keep it and start to build a song around it.
at 10:00 AM