This is an amazing clip of George Harrison watching The Beatles perform "This Boy" 1in 1963.
"This Boy" was the B side to "I Want to Hold Your Hand".
Lennon said he was trying to capture the Smokey Robinson sound at Motown.
The chords are straight out of doo wop ( as were "Yes It Is")
The song is most associated with the one member of the band that did not contribute harmonies to the track: Ringo Starr.
George Martin cut an instrumental version of the tune for Ringo's silly solo scenes in "Hard Day's Night".
Nowhere near one of the great Beatle cuts but this moment is too good to pass up.
Especially as George talks about John's poor eyesight.
at 2:30 PM 2 comments:

Alan Minter was the Middleweight title champ until he met Marvin Hagler at Wembley Arena in London. After the fight was stopped in three rounds, Minter's supporters caused a riot, throwing beer cans and glass into the ring and both boxers had to be ushered away by the police. 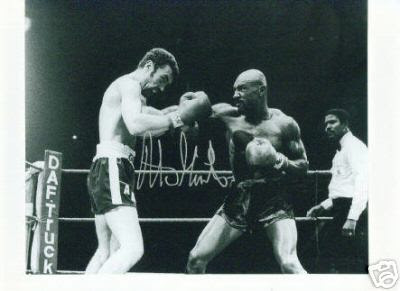