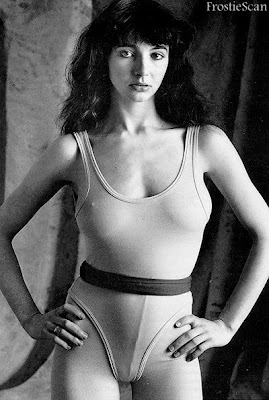 As Told to Smash Hits Magazine for the November 27 - December 10, 1980 issue
via Like Punk Never Happened

Kate made this list a few months after her third album Never For Ever was released. Wait, you're still looking at the photo aren't you?

1.Frank Zappa: Overnite Sensation -"Montana"was the first Zappa track I ever heard and it's stuck as a firm favourite.
2. A.L. Lloyd and Eran MacColl : Blow Boys Blow - I was brought up with this album.
3. The Eagles: One of These Nights - I played it to death when studying with Lindsay Kemp and it reminds me of him.
4. David Bowie Young Americans - It reminds me of 1976, the drought summer and open windows.
5. The Beatles Sgt Pepper's Lonely Hearts Club Band - Because it's an album of excellent songs.
6. Eberhard Weber Fluid Rustle - It's like having your brain massaged.
7. Captain Beefheart Blue Jeans and Moonbeams - This is the Beefheart album where he writes love songs like nobody else.
8. Stevie Wonder The Secret Life of Plants - Because it's a modern symphony with a  high emotional content.
9. Pink Floyd The Wall - Because it reminds me of last Christmas and open fires and I wish I'd written it.
10. The TV National Iranian Chamber Orchestra Treasures of the Baroque Era - Because it allows my mind to sit down and go "aah". I listen to it when doing paperwork. In fact while writing this list!