I was fortunate enough to be a college radio disc jockey at the dawning of "college rock". You young'uns know it as "alternative" now. But back then, in the early 80's, college radio stations began playing music the Top 40 and classic rock stations wouldn't touch. Crazy stuff like R.E.M, U2, The Smiths and XTC.
I spent much of the summer of 1983 in the basement of WTUL.I was drawn by the music, my new  found friends and, this being New Orleans, the air conditioning. This was the summer of the Violent Femmes, Stevie Ray Vaughan and Big Country;  of Speaking in Tongues, High Land, Hard Rain  and Punch the Clock.
But the song that takes me back to that musty basement is this one from 1982. San Francisco's Translator didn't exactly take over the world but for four minutes and three seconds, they created perfection and defined the college rock sound.

From a Pagoda The World is So Tidy: Songs for China 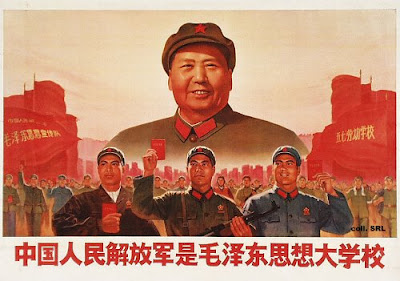 The Chinese will decline a gift three times before finally accepting, so as not to appear greedy. You will have to continue to insist. Once the gift is accepted, express gratitude. You will be expected to go through the same routine if you are offered a gift. 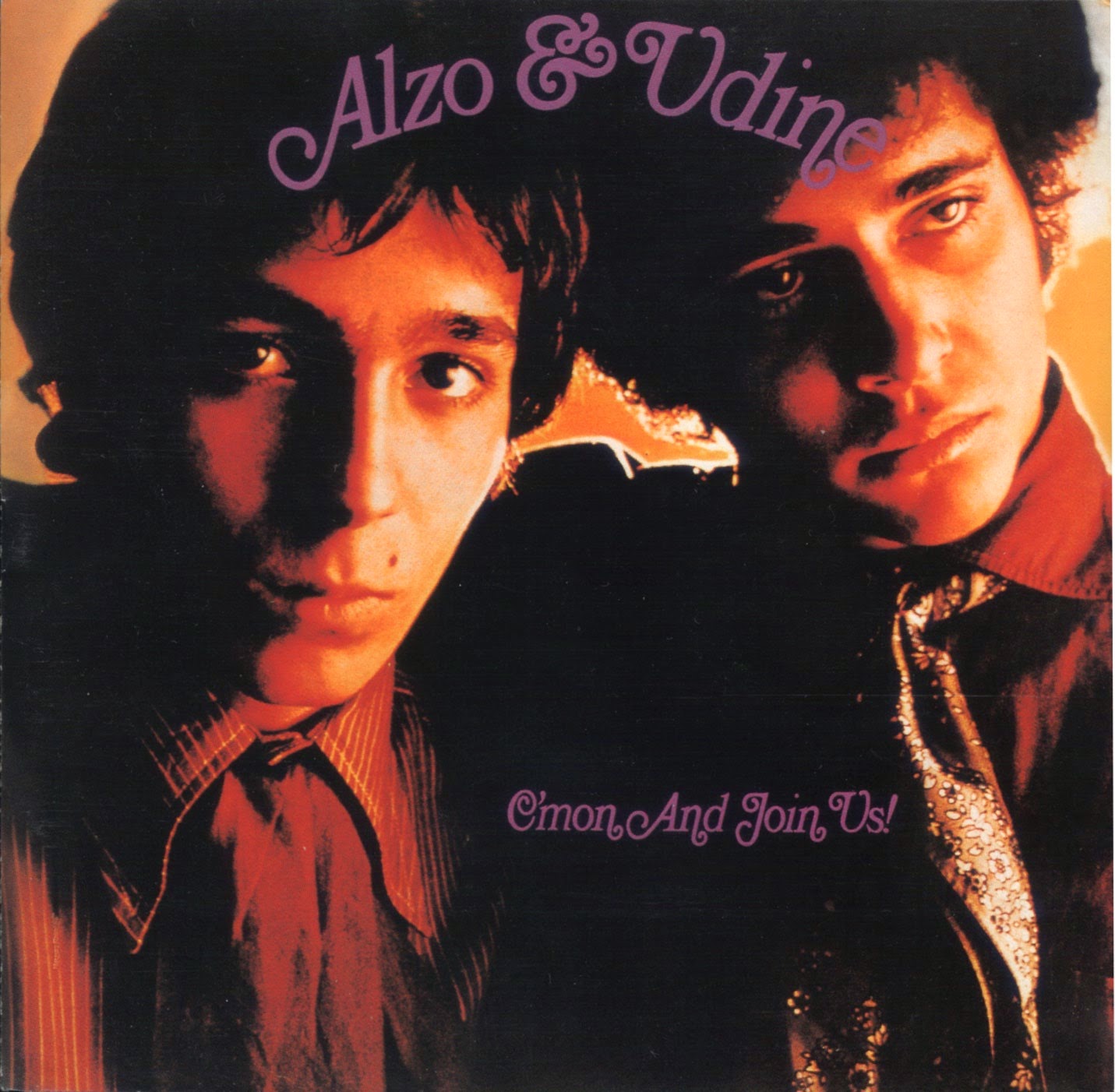 Some "strum and be happy" pop from the NYC combo Alzo and  Udine captures the sunny hippy vibe of the late 60's with a dash of latin soul and a guitar riff borrowed from Archie Bell and The Drells.


Little is known about childhood friends Alzo Fronte (born Alfred Affrunti) and Udine ( whose birth name may have been Ali Noor Uddi) except that they originally recorded together as Keepers of the Light with Brill Building songwriter Jeff Barry producing. With Udine sidetracked by drugs, Alzo continued recording as a solo artist with little commercial success. 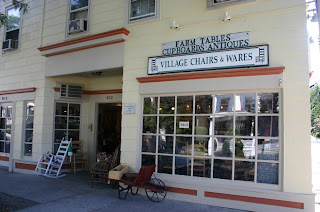 Eventually he and his wife opened up a store selling "new furniture made in the old ways". Village Chairs and Wares is still there in Port Jefferson, NY. The couple were featured in House Beautiful in the late 90's. In 2004, just as a Japanese reissue of Alzo and  Udine led to the duo's rediscovery, Alzo died of a heart attack in a local restaurant.

I've got that Japanese reissue and all I can say is that sunny hippy vibe shines throughout the album. But it's a bit of a one trick pony. Nearly every song has the "Tighten Up" guitar riff.
at 10:11 AM No comments:


Chapter 18: Bowie spends more time with his son and records "Cat People" and the UK#1 hit "Under Pressure" with Queen. He performs in  a Bretolt Brecht play, Baal, a Tony Scott film called The Hunger. and Merry Christmas Mr Lawrence.
He spends days with producer Nile Rodgers ( of Chic fame) listening to The Beatles' "Twist and Shout" and Henry Mancini. The Beatles' "Ahhhhhhh..." and Mancini's horns would both be heard in the song "Let's Dance". 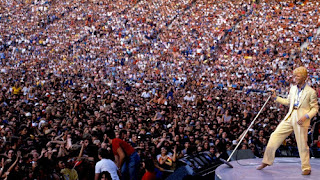 The next album, Tonight, is a disaster. Bowie's brother lies down on a railroad track and kills himself. The press is ruthless towards Bowie who records "Absolute Beginners" and the Mick Jagger duet "Dancing in the Street". (In the video they are obviously competing with eachother for attention: was there enough oxygen in the studio for the crew to even breathe?)


Bowie performs at Live Aid. Then goes on the Glass Spider tour--another disaster.

The Sound + Vision tour is difficult but towards the end he meets his future wife , the model Iman. 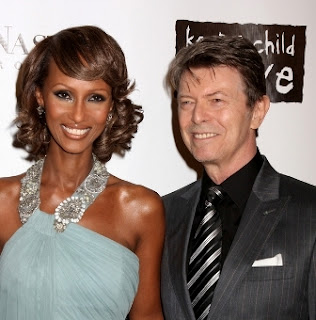 Chapter 21 More forgettable albums. He celebrates his 50th birthday in concert sporting perfect teeth. A daughter is born. The Bowies move to NYC. Bowie has a heart attack and slows down. 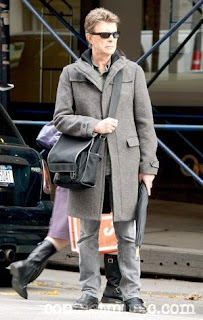 Epilogue Bowie has moved away from the music scene. The best song of this century is the one he writes "off the cuff" in a  hilarious scene on Ricky Gervais' series "Extras"


Starman does what a biography should. It relates the life of the artist and how it is reflected in the art. But I wanted more about the artist and art and less about the business decisions involved. Trynka argues that Bowie eventually become a corporation so I understand his obligations.

Clearly Bowie was the first of the great rock chameleons. Elvis never became anybody but Elvis. Bowie changed his identity once a year in the 70's and inspired other pop chameleons like Madonna and Prince who still savor long careers. And Dammit, Bowie just wanted IT more.

Finally if the future of books is the e-book how long before we begin to see embedded music and video and more pictures? A biography like this one cries out for something more.
at 6:16 PM No comments: 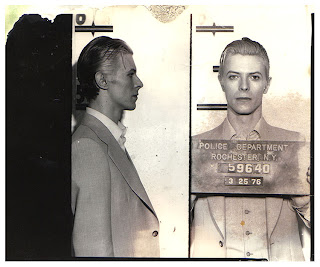 In Chapter 14 Bowie's "ghastly" appearance in a BBC documentary leads to his being cast in his first and best film , The Man Who Fell To Earth. 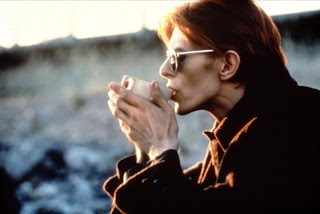 He records Station to Station which features a melody uncomfortably close to George Benson's version of "On Broadway".


In Chapter 15, Bowie and Iggy are friends again. Bowie gets his mug shot taken for possession of marijuana. The two visit the USSR. They record The Idiot. Then Bowie records Low. That's Tony Visconti's wife THE Mary Hopkin ( "Those were the Days") singing the "doo doo doo's" in "Sound and Vision"


In Chapter 16, Bowie and Eno work together on "Heroes" which Bowie debuts on Marc Bolan's TV show days before the T Rex founder dies. Bolan falls off the stage just as he's about to take the mic in this, his final apperance on television.


In Chapter 17 Bowie does his famous duet with Bing Crosby. He divorces "the blowtorch" Angie. 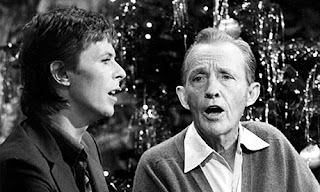 Bowie's band knocks out a live album and Lodger.
Adrian Belew records the famous guitar solo at the end of "Boys Keep Swinging".


Then after a fight with Lou Reed, Bowie records Scary Monsters with the help of Reed guitarist Chuck Hammer on "Ashes to Ashes".

Bowie appears on stage as The Elephant Man and , while he is in NYC, hears that Lennon has been shot.
at 6:48 PM No comments:

In Chapter 10, Bowie tours America with the Spiders. And mountains of cocaine. They record "The Jean Genie"--a song about Iggy Pop --borrowing a famous riff from Muddy Waters ("I'm a Man"). Angie and Bowie are butting heads constantly.


In Chapter 11, Bowie records his cover album ( Pin -Ups) before Bryan Ferry finishes his cover album (These Foolish Things) and tapes a special for NBC that never airs...as his costume, seen above, is declared too provocative.
In Chapter 12 Bowie tries to "out Rolling Stone" the Rolling Stones with the album Diamond Dogs. He gets close with "Rebel Rebel" (note the drums echoing "Satisfaction")

After seeing the Main Ingredient in Chapter 12, Bowie tries to record a soul album. He name drops as many American images as possible in "Young Americans" including Nixon's resignation announced three days before the song was recorded.

Bowie and Lennon have a blast in a NYC studio, borrowing riffs from The Rascals "Foot Stompin" (really?) and Shirley and Company's current hit "Shame Shame Shame" which Bowie mishears during the jam as "Fame Fame Fame". The last minute addition to Young Americans is Bowie's first #1 hit in the US. He celebrates by performing on Soul Train.