ELP: Seven Virgins and a Mule 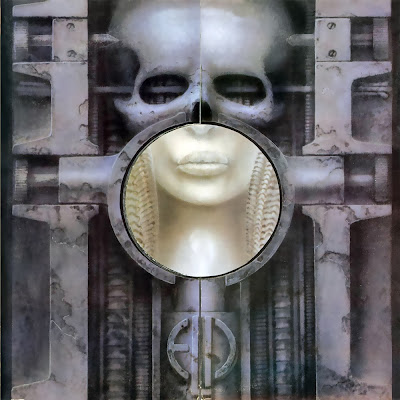 Music with me is an instinctive thing. I can , and have, disciplined it but when you want to put on an emotion such as aggression and the music is not enough to express it, I let myself loose. Sometimes it's sad to think it's only the visuals that people remember.
-Keith Emerson

On November 19, 1973 Emerson Lake and Palmer released Brain Salad Surgery, the best known of their albums thanks, in large part, to the cover art by Swiss surrealist painter H.R. Giger and the inclusion of such FM radio staples as the ballad "Still...You Turn Me on" and the showstopper "Karn Evil 9: 1st Impression, Pt. 2"  which opens with the line "Welcome back my friends...to the show that never ends".

The album is not so easy on the ears 40 years later. Today, no band in its right mind would tackle William Blake, Argentinian composer Alberto Ginastera and a sci-fi concept album side about man and an epic battle with computers. But ELP--made up of three musical grand-standers -- was at its creative peak. The band put the album together, stanza by stanza, in an abandoned London cinema they rechristened Manticore Studios
.


Below is a terrific 53-minute documentary on ELP in 1973. Fast forward 13 minutes in to see Keith Emerson wrestle his organ. ( Safe for Work despite that description)


My favorite fact about Brain Salad Surgery is its working title: Whip Some Skull On You, which may explain the album cover. Also, the BBC refused to play "Jerusalem" because it was felt the ELP recording "degraded the traditional English song".