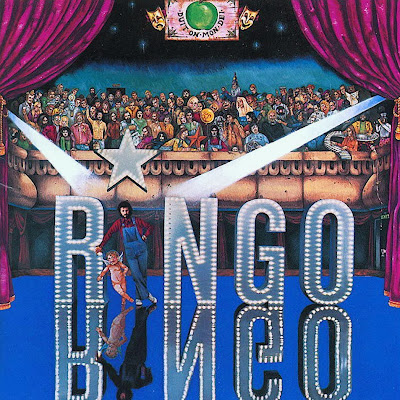 With more than a little help from his friends, Ringo Starr released the best of his solo albums, simply titled Ringo,  on November 2, 1973. Anticipation for the album was maxed out not only because the first single, "Photograph" (written with George Harrison) was climbing the chart on its way to #1 ( It was #11 with a bullet that week) but because this was the first album to feature contributions from all four Beatles ( and Billy Preston).

Melody Maker broke the news in this way in March of '73:

"Rumours flashed through Los Angeles this week that three of the Beatles have teamed up for recording purposes. John Lennon, George Harrison and Ringo Starr are all in Los Angeles with Klaus Voormann, the bassist rumoured to replace Paul McCartney after his departure from the group."

It's true that Lennon wrote the lead track, "I'm The Greatest" ( after watching A Hard Day's Night on TV), and plays keyboards along with Preston while Harrison chimes in on guitar. And yes,  Beatle friend Voorman plays bass.  But that was the extent of Lennon's involvement with the album.

Never to be outdone, McCartney contributed the song "Six O'Clock". He also plays piano and sings backing vocals with Linda. McCartney also sings on "You're Sixteen" harmonizing with Harry Nilsson. No other single member of The Beatles could ever have brought the band this close together. They can all be found at the center of Sgt Pepper-reminiscent album cover.

There were other friends as well : Marc Bolan ( T.Rex) plays guitar on the Randy Newman written "Have You Seen My Baby (Hold On)". Most of The Band is playing on the Harrison-penned "Sunshine Life For Me ( Sail Away Raymond)". There's Martha Reeves and Merry Clayton singing on"Oh My My"

Somehow this huge cast contributes to an album that has a light, sunny, goofy feel: the way we most fondly think of Ringo himself. It is not one of the most important albums to be released in 1973 but it is certainly one of the most enjoyable.

The latest version on CD is amended with three additional tracks including the 1971 Top 5 hit "It Don't Come Easy" and Ringo's "open letter to The Beatles" "Early 1970.