40 Year Itch : Somebody Bite The Whip 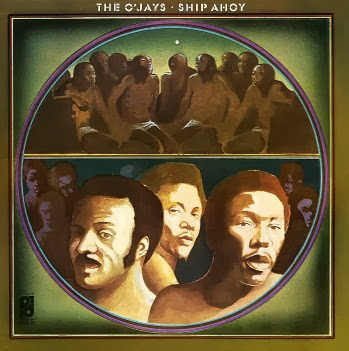 When it comes to socially conscious soul music, Stevie Wonder's Innervisions and The O'Jay's Ship Ahoy, released November 10, 1973, stand head and Afro above everything else released in 1973. On songs composed and arranged by Philadelphia International's Kenny Gamble and Leon Huff, The O'Jays tackle corruption ( "For the Love of Money" #3Soul/#9 Pop), pollution ("The Air That I Breathe") black-on-black crime ( "Don't Call Me Brother") and slavery ( on the cinematic title track).

Originally intended for the Shaft in Africa soundtrack, "Ship Ahoy" uses sound effects of creaking boards, wind, sea and cracking whips to take listeners to the Middle Passage of the Atlantic slave trade. Songwriter Gamble told Mojo Magazine the lyrics are inspired by a visit to West Africa that came several years before Alex Hailey's Roots.

Huff and I both went to Ghana, (to) the slave castle, We stood in the Door Of No Return that led you right to the slave ship and that was it for you, you were done… finished with your family, your children, your wife, just disconnected from life and you we were in chains and they sold you like you was cattle or a donkey or anything.

Ship Ahoy also offers  plenty of sugar to attract record buyers. The first single, "Put Your Hands Together", has the same catchy, gospel feel as The O'Jays' 1972 #1 hit" Love Train". That song would peak at #2 in the Hot Soul charts and #10 on the Hot 100.

Then came "For the Love of Money" with its catchy bass intro and studio-engineered backwards spliced vocals. Thanks to Donald Trump, most people think the song glorifies wealth. It's actually a warning about that "mean mean green", quoting a Bible verse that reads "For the love of money is the root of all evil".
"Now That We Found Love" became a  1978 European hit for the reggae band Third World.
Ship Ahoy is one of the indispensable albums of 1973.
at 3:00 AM