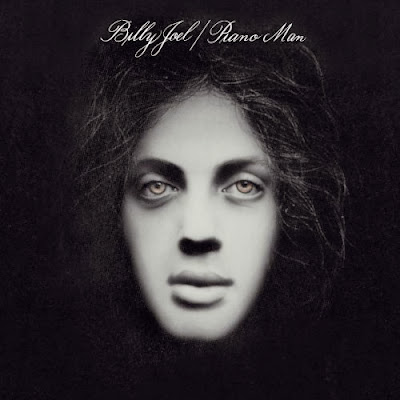 "Joel has a fine shot at establishing himself as consistent AM quality artist with large scale songs and dynamic performing range"--Billboard Magazine, Nov  17, 1973

Indentured to Artie Ripp's iron clad contract and waiting for a record deal that was supposed to happen any day, Billy Joel was also in need of money so he spent some down time as Billy Martin , lounge pianist at the Executive Room in Hollywood. From his piano, he made observations that helped him write "Piano Man", the title cut of his Columbia Records debut and his first hit single, peaking at #25 in 1974.

Though Joel would sound like a wanna-be Paul McCartney in later years, here he sounds like a wanna-be Harry Chapin, who, with "Taxi",  also had a hit with semi-autobiographical tale of his lean years. 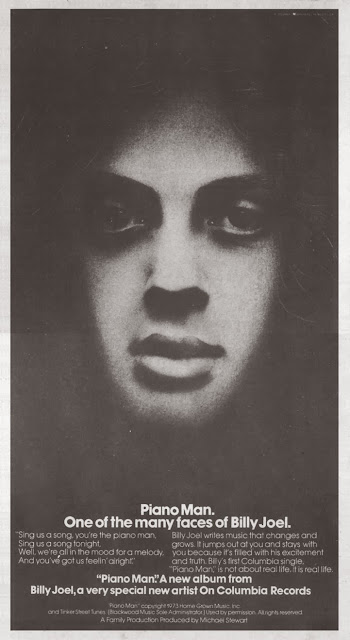 "Piano Man" was a new song...and a waltz! But not everything on the album was new, Joel confessed at the time:

Some of things on Piano Man are old. "Captain Jack", "Billy the Kid" and "Travelin' Prayer" are two years old. The rest of it comes from about six months ago...I'm not sure what I was aiming at with this album. I guess they're just songs.

Columbia execs were happy with the debut which established Joel as an up and coming pop artist.  Eventually Piano Man would sell more than two million copies, but thanks to one of those criminal recording/management contracts we hear about far too often, Joel himself only netted $8,000 from the debut. Artie Ripp still owned a  piece of Joel's songwriting contract. According to a 1991 Spy Magazine article. Joel had to spend "tens of millions" to get out of his contract but , even then, Ripp was still getting a percentage of every Joel album up to 1986's The Bridge.