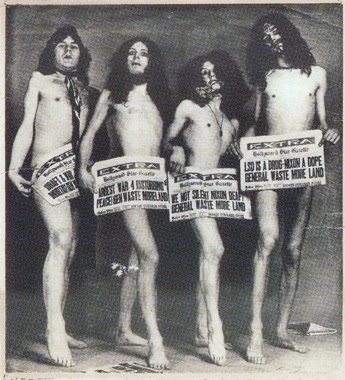 In November of 1973 a French TV crew captured The Pink Fairies in all their messy, anarchic glory...stomping their way through what I have to believe is a version of "Uncle Harry's Last Freak Out" ( from their debut album) with former Pretty Things drummer Twink who had rejoined the band he founded for a brief spell. The Pink Fairies had their own sets of rules. They believed in free drugs, free condoms and , most revolutionary of all, free concerts that were often performed outside the gates of the big pop festivals.

Made up originally of former members of The Deviants, Twink and Steve Peregrin Took of T.Rex on guitar, the Pink Fairies went through far too many line-ups for any sane person to keep track.

Perhaps more than the music it was the idea of the Pink Fairies, banned for life from the BBC,  that inspired future punk rockers. Henry Rollins even covered "Do It" , the opening track from the Fairies 1971 album  Never Never Land