On November 10, 1973 Harry Stone's TK Records, out of Hialeah, Florida,  took out a small  ad in Billboard Magazine celebrating the success of some current singles on the Hot Soul Singles chart including one that peaked at #27 on the soul charts called "Blow Your Whistle" by a band called KC and the Sunshine Junkanoo Band.

Harry Stone had mainly been in the record distribution business when he lost one of his biggest clients during the Warner-Elektra-Atlantic merger. For his next move he turned to two guys in the Hialeah warehouse who didn't know how to read or write music: Harry Wayne Casey (aka "KC") and Richard Raymond Finch (a student recording engineer and self taught drummer). 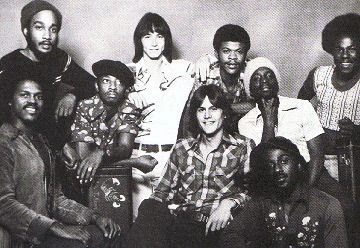 But even that was a year away. And nobody knew what was coming. So it's just a small ad ( made smaller because of my own technical difficulties)  and T.K. ( named after recording engineer Terry Kane who built Stone's 8 track studio) is just a small label.

The other singles mentioned in the ad  are actually from other small labels Harry Stone owned. Gwen McCrae, on the Cat label, had a single called "For Your Love" which was stalling at #44. Her "Rockin' Chair" would be a Top 10 hit in 1975.

Latimore's cover of the classic "Stormy Monday" was on Stone's Glades imprint label . It would peak at #27 on the Soul charts.  In 1974 his "Let's Straighten This Out" would top the Soul charts.

And at #78 another Glades artists, Timmy Thomas, who hit #1 on the Soul charts a year earlier with "Why Can't We Live Together", had released a new single from his follow-up album