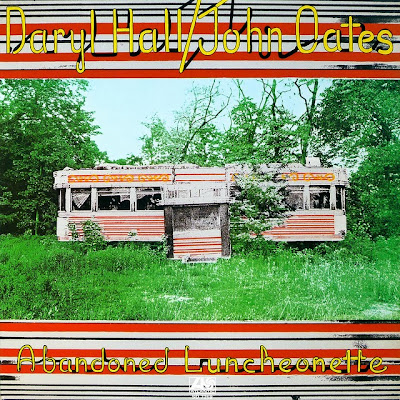 Here's one one of 1973's true gems: both easy on the ears --like the best singer songwriter efforts of its day-- and soulful in that blue eyed way that would eventually make Hall and Oates one of the most successful acts in the mid-70's and 80's. The sound of Abandoned Luncheonette, and the one their label wanted most to promote, all stems back to the debut album cut "Fall in Philadelphia". You can hear a similar vibe on the best cuts: "When the Morning Comes", Las Vegas Turnaround" and the title track.

The best known track, "She's Gone", is based on the break-up of Daryl Hall's marriage and John Oates getting stood up on New Year's Eve. Released as a single, it stalled at #60. Then, in 1974, Tavares cut a similar version that topped the R and B charts. Following the success of the 1976 single "Sara Smile", RCA re-edited "She's Gone", knocking 60 seconds off the running time. The result: a Top 10 hit.


In his book Hitmaker: The Man and His Music, Hall and Oates manager Tommy Mottola writes:

We were shocked when "She's Gone" failed to become a hit as soon as it was released. But by no means was I disillusioned. I knew that "She's Gone" was a hit. I knew it was a smash. I knew that Atlantic had dropped the ball...the album was not a commercial success. But stories began to trickle back that Led Zeppelin's lead guitar player, Jimmy Page, was seen carrying around the Abandoned Luncheonette album while on tour. That made Daryl's day. It made his day more than if you'd told him that "She's Gone" was at the top of the singles charts, because Jimmy Page was one of Daryl's idols, and that meant credibility and integrity.

The iconic album cover shows Pottstown PA's old Rosedale Diner sitting in the weeds outside of Philadelphia. The story of the diner's demise is told in this very thorough blog post.

Despite disappointing sales for Abandoned Luncheonette, Atlantic Records considered Hall and Oates on the verge of stardom. But the duo had something else in mind: rock credibility. But the story of War Babies must be saved for another day .
at 3:00 AM