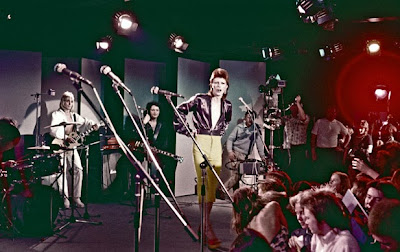 By late 1973 David Bowie was one of the biggest rock and roll stars in the UK. In America, not so much. Ziggy Stardust had only peaked at #75 in the Billboard charts. "The Jean Genie" stalled at #71 on the Hot 100 charts. For Bowie, NBC's "Midnight Special" was seen as the best opportunity for a big breakthrough in the U-S.  That meant resurrecting his retired Ziggy Stardust persona for one last wham bam thank you ma'am.

The result: The 1980 Floor Show featuring one new song, "1984/Dodo", a collection of poorly designed sets, and a bizarre performance from Marianne Faithful in a see-through nun outfit. If the show below doesn't meet your expectations, be thankful you weren't in the studio audience. Writer David Thompson says "It was really disappointing, with him doing the same three songs 40 times."