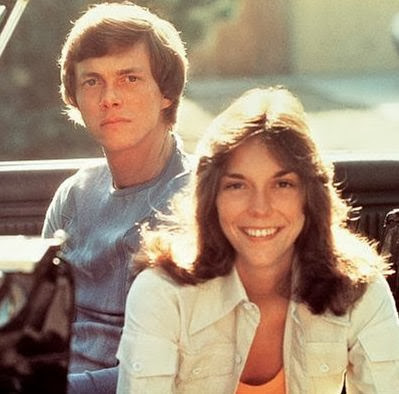 On November 5, 1973 The Carpenters appeared on The Tonight Show with Johnny Carson. They were there to promote their greatest hits album, The Singles 1969-1973,  so they smartly performed a medley of hits, sat down for an interview in which they gave an account of recent scare on a small plane, and then performed another song.

Among the songs in the medley is Leon Russell's "Superstar( Groupie)" which Richard Carpenter first heard Bette Midler perform on The Tonight Show. Karen, already familiar with the tune,  didn't care for the song but their recording hit #2 in 1971. They also perform "Goodbye to Love" with its head melting guitar solo.

In the interview Karen especially comes across as a self-effacing girl next door. She's actually a bit of a nerd. But that voice...!

The final song is a strange choice. From the 1970 album Close to You, "Mr Guder", Richard Carpenter's slap down of a Disney Parks executive,  is a jazzy little number that lets the band stretch out a bit.
at 3:00 AM