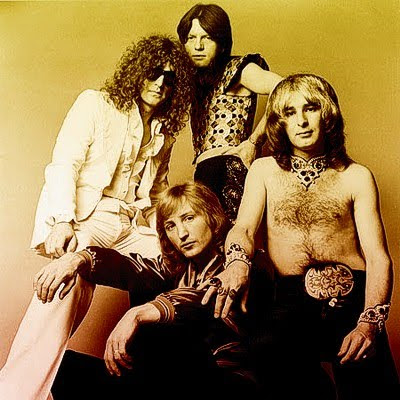 It happens more often than we'd like to remember. Great bands end not with a bang but with a whimper. And so it would have been for Mott The Hoople. On March 26, 1972 Ian Hunter and the boys decided to call it quits. Had it not been for David Bowie, Mott's last album would have been Brain Capers ( a hard rocking effort that kicks off with  "Death May Be Your Santa Claus") and their last single would have been their cover of Danny Whitten and Neil Young's "Downtown" ( aka "C'mon Baby Let's Go Downtown") which features the lead vocals of not Ian Hunter but Mick Ralphs.

It was, of course, a huge flop! But by then, so was Mott The Hoople. They rocked as hard as ever but that didn't translate in ticket or record sales. They were actually losing money on tour. In Zurich they landed a gig at a club that was once a huge gas holder As Ian Hunter remarked "If this is fame, then forget it."

When they returned to England the band members set off in their own directions with Overend Watts calling up David Bowie to see if he needed a bassist. Bowie, who had once offered Mott "Suffragette City", got the band together and played them a new song he'd written. That song was "All The Young Dudes" and it would not only revive Mott's career but would make them one of the biggest rock n roll acts in the mid-70's.

I'll post a whole lot more on  Mott The Hoople  on September 8, the 40th anniversary of All The Young Dudes.