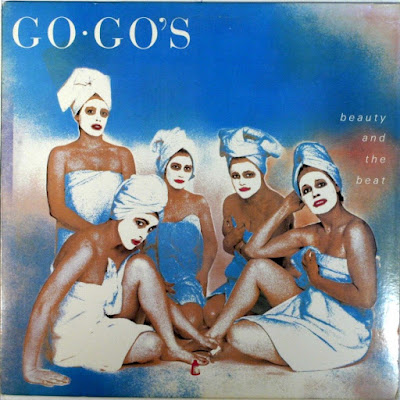 Go Go's : This Town
On July 8, 1981 The Go Go's released their debut album, Beauty and the Beat, on IRS Records. It would take nine months and MTV, but the album topped the US charts for six weeks beginning in March of 1982."We Got The Beat", a #2 hit, introduced American audiences to the five musicians who came across as best friends.
"This Town" is the mission statement. /"We all know the chosen toys/ Of catty girls and pretty boys". As Rob Sheffield writes in the Spin Alternative Guide:
In Go-Go's songs, the pretty boys just kept their mouths shut and preened, while the catty girls took center stage to make up that face, jump in the race, and get dressed up to get messed up, whether flashing their underwear in public fountains or prowling by night. The Go-Go.'s eventually developed a knack for songs about men ("Turn To You", "Yes Or No"), but their grand theme was always femme bonding : we rules the streets tonight, this town is our town, our lips are sealed.
The best Go-Go's songs begin with tomboy Gina Schock laying down the beat. 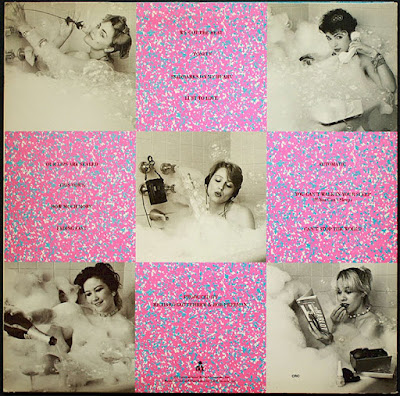 While American critics swooned, the English were less taken with the album .Robert Eggar from the NME summed up the album writing that
"The Go-Go's play sixties pop for the eighties with a seventies philosophy. This record is three years of struggling with instruments, of sleeping on floors in strange cities, of flirting too close with an easy terminal escape from reality. It sounds like a joyous, bubbling celebration by five cute girls, with no thoughts inside their darling little heads save for tonight's beach party."
But there's also some disillusionment with the seedy side of Hollywood night life, summed up on "Tonite," "Lust to Love," and "This Town", which includes lyrics that provide a counterpoint to that joyous MTV video: We're all dreamers, we're all whores/ Discarded stars/ Like worn out cars ".
Beauty and The Beat finished #10 in the Village Voice Pazz and Jop critics poll. It topped Greil Marcus's list:
GREIL MARCUS:
Go-Go's: Beauty and the Beat (I.R.S.) 20;
David Lindley: El-Rayo-X (Asylum) 20;
Red Crayola with Art & Language: Kangaroo? (Rough Trade) 15;
Neil Young & Crazy Horse: Reactor (Reprise) 10;
The Mekons (Red Rhino import) 10;
Joy Division: Still (Factory import) 5;
Rickie Lee Jones: Pirates (Warner Bros.) 5;
The "King" Kong Compilation (Mango) 5;
Au Pairs: Playing with a Different Sex (Human) 5;
Raincoats: Odyshape (Rough Trade) 5.
at 12:00 AM