And the crowd goes wild. Well, maybe not. I would hope it's because they're German and don't understand what Lee Dorsey is singing or they've been told to sit still UND DUNT MOVE EINE INCH BECAUSE VE HAFF VAYS OF MAKING YOU ...( never mind)
.This footage is from a 1967 show, headlined by Sam & Dave, from Offenbach in 1967.

Born in New Orleans ( and raised in Portland OR where he eventually boxed as "Kid Chocolate") Dorsey is best known for "Ya Ya" "Ride Your Pony"(see below) and "Working In a Coalmine". But hipsters have long known there's a whole lot more to the Lee Dorsey oeuvre than the obvious pop hits. 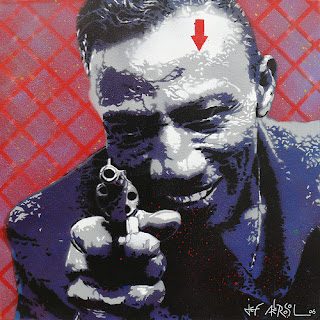 Produced by Allen Toussaint, "Get Out of My Life Woman" hit #44 in the American pop charts in 1966. #5 R&B and #22 in the UK. Beck sampled the drums in "Where It's At". ( Biz Markie, De La Soul and Wu Tang Clan also sampled elements of "Get Out of My Life").
Dorsey continued to work into the 1980s, until he was stricken with emphysema. On December 1, 1986, Lee Dorsey passed away in New Orleans, Louisiana, at the age of 62, three weeks before his 63rd birthday.