Interview with Don Wilson of The Ventures

Before Kurt Cobain grinded out grunge...
Before Jimi Hendrix made his six stringer sing psychedelic...
the first guitar heroes of the Northwest were a pair of clean-cut brick layers from Tacoma.

Now more than 50 years and 110 million records sales later, The Ventures can claim a place in The Rock and Roll Hall of Fame.

The adventure of The Ventures began on Seattle construction sites when brick-layers Bob and Don decided rock and roll had more to offer.
They each bought a guitar in a Tacoma pawnshop.

They met bass player Nokie Edwards.
From a Chet Atkins album called Hi-Fi In Focus, they discovered a track that would change their lives:
"Walk Don't Run".


He played it in a classical jazzy style and we couldn't play it like that. We weren't good enough. So we decided to make our own arrangement of it and simplify it and that's how that happened.

They saved $300 and recorded "Walk Don't Run", which they released in the Fall of 1960 on their own Blue Horizon label.
Nothing happened.
Until moths later... when legendary Seattle DJ Pat O'Day used "Walk Don't Run" as his news theme.
The requests came pouring in and the song took off, eventually reaching #2 on the US pop charts.


To cash in quickly, the label put out the debut album before The Ventures ever got a chance to pose for the cover. 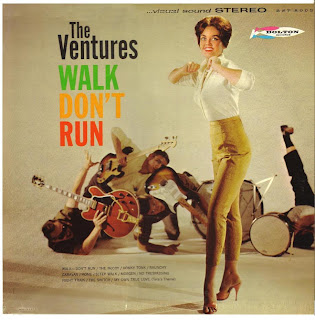 Don: These are all stock boys. That's not even us.

Don:He was one of the best drummers I've ever heard.


The Ventures recorded concept albums long before any other rock act did.
The Colorful Ventures (1961) featured songs with colors in the title. The Ventures in Space (1964) had a sci fi theme.


Their first Christmas album (1965) ranks among the very best.
Here's"Santa Claus Is Coming to Town"" mp3
At the height of Beatlemania, The Ventures were met at the Tokyo airport by thousands of screaming fans.


You couldn't go anywhere. You had to stay in the hotel. There were big crowds outside the hotel.

Because they played mostly instrumentals, The Ventures had no language barriers to break. So the Tacoma boys reportedly outsold the Beatles in Japan two-to-one...even as they played Beatle covers like "I Feel Fine" mp3

In 1965 they recorded perhaps their most influential album: Play Guitar With the Ventures. The first of seven instructional albums.
Tom Hamilton of Aerosmith says "I think I was ten when I learned "Tequila" off of that album and the booklet was so well laid out and so easy to learn I don't know why nobody ever did it again." 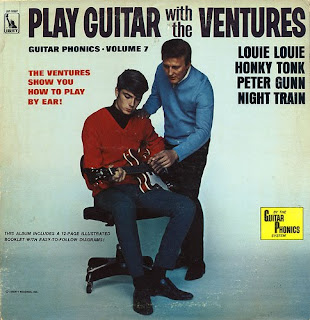 A 1969 hit cover of the "Hawaii Five-O" Theme would be the Ventures's last big hit in the U-S.

But even as their stars faded stateside, The Ventures sold 50 million albums in Japan where they toured relentlessly.

One year we did 106 concerts in 78 days without a day off and that will do you in.


Tragedy would strike on the 1996 Japanese tour.
Doctors found a malignant tumor in Mel Taylor's lungs and told him to go home. 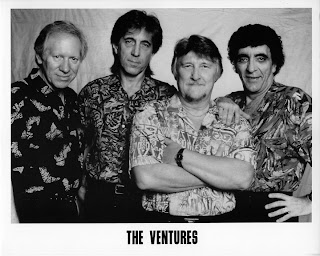 He couldn't even talk to us. He was in tears so he just turned around and walked away in the elevator and that's the last time I saw him.

11 Days later Mel died.
Somehow, even after hearing the news, the band found the courage to perform that night.

It's amazing what you can do when you have to. You just got to shut it off and when the show's over, it's back to the real world. But grown men do cry.

Mel's son Leon has taken the drums. He was there when The Ventures finally got inducted into the Rock and Roll Hall of Fame in 2008 with the help of John Fogerty.

Many thought the honor was long overdue, but that just made the whole thing sweeter for Don Wilson.

I think even if we had gotten in earlier than this it would have been forgotten about by now.
When I think about buying those two guitars in a pawnshop, recording "Walk Don't Run" that this would happen fifty years later... It's mind boggling.To me it's great!

Bob Bogle passed away two years ago this month but Don Wilson is willing to play The Ventures' signature tune until he can no longer pick up a guitar.