40 Year Itch: The Snark Sails Away 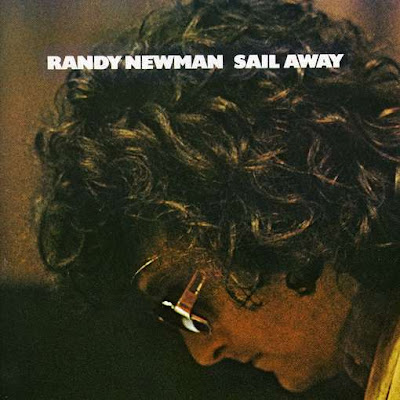 That Randy Newman didn't sell anywhere nearly as many albums as his more famous contemporary singer-songwriters is an indication of only one thing: Americans don't get satire, irony or sarcasm. We prefer to have a point jabbed into our chests. Randy Newman nonchalantly drawling out  strip tease requests in "You Can Leave Your Hat On" (" Baby take off your dress/ Yes, yes, yes") only works for us when Joe Cocker is squeezing the meaning out of every line while Kim Basinger strips for Mickey Rourke in 9 1/2 Weeks.

But dig it. Randy Newman invented "Snark". When Newman uses the politician's throwaway applause line "It's great to be an American", it's coming from a slave trader trying to get Africans on a boat setting sail for Charleston in "Sail Away".

There is something for everybody on this album. Play "Simon Smith and The Amazing Dancing Bear" for the kids and "Dayton, Ohio-1903" for the grandparents ( and iced tea fans). C'mon! He calls Cleveland the "city of light, city of magic" in a song about the Cuyahoga River catching fire. Have you been to Cleveland?

Anyway, the version of another classic Sail Away cut, "Political Science", you'll hear is from a 1974 live show in Sausalito,CA . Randy was out pushing the follow up Good Ole Boys at the time. Another magnificent album that would be as misinterpreted and forgotten as Newman's anti-prejudice anthem "Short People" would be in 1977.