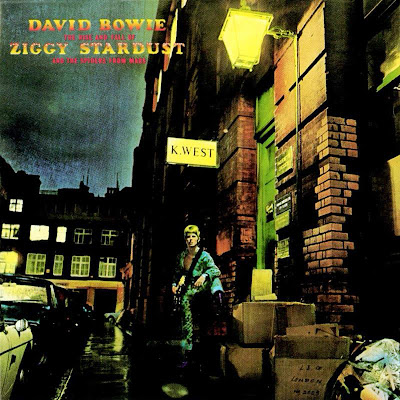 
"I fell for Ziggy too. It was quite easy to become obsessed night and day with the character. I became Ziggy Stardust. David Bowie went totally out the window. Everybody was convincing me that I was a Messiah, especially on that first American tour (late 1972). I got hopelessly lost in the fantasy." - David Bowie ( 1976)

With The Rise And Fall of Ziggy Stardust And The Spiders From Mars, released June 6th , 1972, we can all witness David Bowie making love to his ego. Or is it his alter ego?


1972's best release ( there, I've said it) is a concept album and a statement about Bowie's own conflicted desire for stardom. The earth has five years left. (suggesting 1977, the year punk broke out, would be a pivotal year) Doom is at hand when a space invader arrives and offers salvation. To spread his message Ziggy Stardust becomes an androgynous rock star and takes the stage with The Spiders From Mars. But stardom lasts little longer than a cigarette and Ziggy's downfall ends on stage in a rock and roll suicide.

"At this point I had a passion for the idea of a rock star as meteor and the whole idea of The Who's line 'Hope I die before I get old'. At that youthful age you cannot believe that you'll lose the ability to be this enthusiastic and all-knowing about the world, life and experience. You think you've probably discovered all the secrets to life. Rock n Roll Suicide was a declaration of the end of the effect of being young"-DB

Bowie created his own myth and The Rise and Fall is its bible. If his band really was The Spiders From Mars then surely Bowie was Ziggy Stardust, a combination of Iggy Pop, Marc Bolan and Brit rockabilly star Vince Taylor who once confided to Bowie that he knew where all the UFOs were going to land. 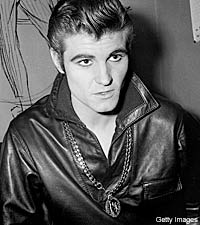 "He was the inspiration for Ziggy. Vince Taylor was a rock n roll star from the Sixties who was slowly going crazy. Finally, he fired his band and went on-stage one night in a white sheet. He told the audience to rejoice, that he was Jesus. They put him away." DB 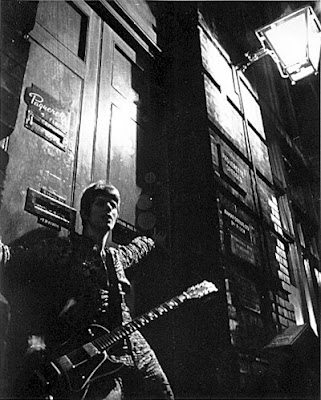 When he began recording Ziggy, Bowie was at the height of his creative powers. Just weeks after Hunky Dory's release, Bowie knocked out the cover of Ron Davies's "It Ain't Easy " in September of 1971. November proved more fruitful with "Hang on to Yourself", "Ziggy Stardust", "Rock 'n' Roll Star" (later shortened to "Star"), "Moonage Daydream", "Soul Love", "Lady Stardust", and "Five Years". "Starman", "Suffragette City", and "Rock 'n' Roll Suicide" were all recorded in early '72.

Mick Ronson leads the band with his jet fueled guitar lines. Listen to his call and response to Bowie's lyrics on "Moonage Daydream" and then witness the string arrangements he helped Bowie write.

5 Interesting Facts About The Rise and Fall of Ziggy Stardust

1. Ziggy came from the name of a London tailor's shop, Ziggy's,  and reminded Bowie of Iggy Pop. Stardust came from Bowie's label mate "The Legendary Stardust Cowboy" whose novelty song "Paralysed" Bowie had been obsessed with.

'In 1972, I’d get girls on the bus saying to me, "eh la, have you got lippy on?", or "are you a boy or a girl?" Until he turned up it was a nightmare. All my other mates at school would say, ‘Did you see that bloke on Top Of The Pops?’ He’s a right faggot, him!’ And I remember thinking, ‘You pillocks’, as they’d all be buying their Elton John albums, and Yessongs and all that crap. It made me feel cooler.’


3. The Sweet wrote a parody of Ziggy Stardust and the song Star called Rock And Roll Disgrace:
You're a heterosexual dream/ a super phallic machine/ Well who do you think you are?/ Well you think you're a star yeah a rock and roll star, you are

4. The prominent K. West sign seen on the cover has nothing to do with Kanye West of course. It was the name of a distribution company which shipped animal furs. 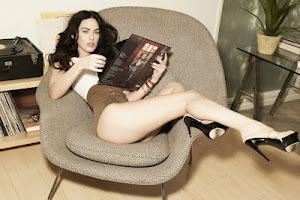 for more great facts about David Bowie and his Ziggy Stardust era check out this website.
at 2:00 AM