40 Year Itch: Something To Make You Happy 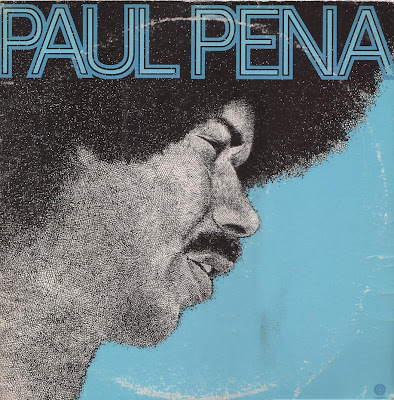 A blind San Francisco songwriter with a soulful bass singing voice that would make any country singer jealous, Paul Pena ( rhymes with "Tina") will go down in rock history as the man who wrote Steve Miller's 1977 Top 10 hit "Jet Airliner". But the Paul Pena story is a lot more interesting than that.

- He lost his eyesight at 20 from congenital glaucoma
- He played bass on Bonnie Raitt's 1971 debut album
- He opened for Jerry Garcia and Merl Saunders in Berkeley
- A documentary, Genghis Blues, following Pena on his journey to Tuva to master Tuvan throat singing was nominated for an Oscar.
-In 2001, he performed "Jet Airliner" on Conan. ( Well, not on Conan. On his show)

Pena recorded his Capitol Records debut with Jeff "Skunk" Baxter on guitar. It's full of acoustic guitars jamming along in a more or less funky way and soulful singing. Naturally, it went unnoticed by all but the most astute critics and record buyers. Robert Christgau gave the debut an A-,  writing:

"Between his rolling virtuoso guitar and his abiding vocal soulfulness (the man leaves mere conviction back with Norman Vincent Peale) he moves me."

Though long out of print, Pena's debut is now available on iTunes and Amazon as mp3's. Pena's second album New Train, which contained his original version of "Jet Airliner" was shelved by Albert Grossman after a disagreement and remained unreleased until 2000.

By all accounts a gentle soul, Pena passed away in 2005.