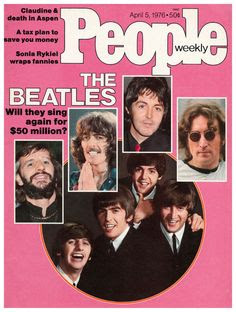 On February 20, 1976 , The Beatles failed to meet a deadline to respond to promoter Bill Sargent's offer to pay them $50 million to reunite. Ringo Starr's lawyer Bruce Grakal told Rolling Stone Ringo didn't reply to the concert guarantee " and I'm sure no one else has. If the four of them ever get together it will be because they want to, not because of dollar offers." Grakal added: "In the three years I've represented Ringo, we've had at least 12 substantial offers. We've not responded to any of them."

In April, producer Lorne Michaels made a tongue on cheek offer to pay the Beatles $3000 to reunite on Saturday Night Live."You divide it anyway you want. If you want to give Ringo less, that’s up to you. I’d rather not get involved.”

Little did he know, John Lennon and Paul McCartney were watching the show in New York City that night. As Lennon would reveal in 1980"(we) almost went down to the studio, just as a gag. We nearly got into a cab, but we were actually too tired. … He and I were just sitting there watching the show, and we went, ‘Ha ha, wouldn’t it be funny if we went down? But we didn’t.”
at 10:10 AM