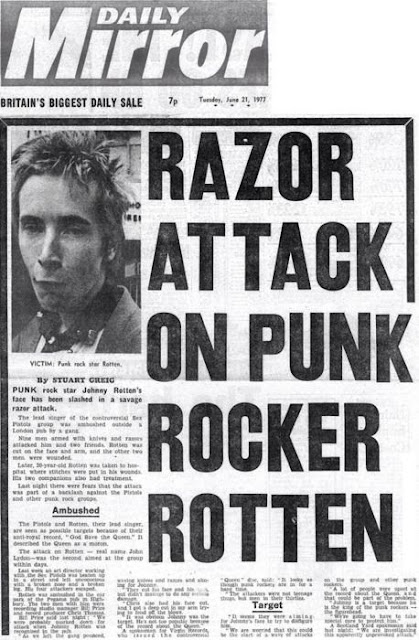 The Damned : Stab Your Back

On June 18, 1977, the day The Sex Pistols began recording the rest of the tracks that would make up their classic Never Mind The Bollocks debut album, Johnny Rotten was attacked by a gang of nine men wielding razors and at least one machete outside the Pegasus pub in Islington, London. The attack left him with a slashed arm and tendon damage.

Six days earlier, after the Pistols sabotaged the Queen's jubilee,  The Sunday Mirror ran story with the headline "Punish the Punks!" Apparently some readers took it to heart.

Chris Thomas and I were in the Pegasus, just around the corner from Wessex Studios,’[Rotten] says, ‘and as we left, we were attacked in the car park by a gang of knife-wielding yobs, who were chanting, ‘We love our Queen, you bastard!’ Normally I’d say they were National Front, but a third of them were black. They were just lads out for violence. I got some bad cuts from that. It severed two tendons, so my left hand is fucked forever, and as I’m left-handed, I can’t close the fist properly. I’ll never play guitar: there’s no power to it. I jumped into the car and someone jumped after me with a machete and cut me from there [he points to his thigh about a foot down] . . . to there [his knee]. I had on extremely thick leather trousers at the time, thank fucking God, because it would have ripped the muscle out and now I’d be a one-legged hoppity.'” 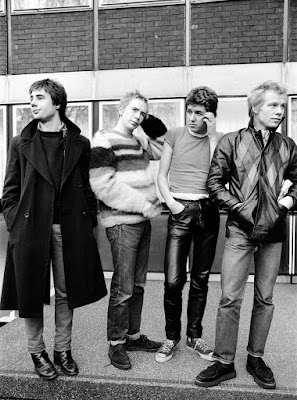 There were other attacks in June of 1977. Pistols drummer Paul Cook was attacked the next day by six men who struck him with a crowbar. Gaye Advert and TV Smith of The Adverts were beaten up on June 21. At the hospital they were asked what did they expect, dressing up like that? Rotten again was brutalized two days later. On the last day of the month , The Damned's front man Dave Vanian was attacked in his dressing room, sustaining a dislocated shoulder.