Here We Are Stranded 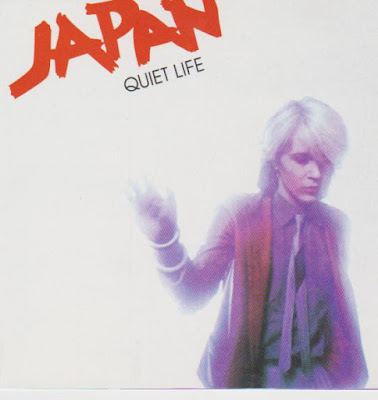 On December 20, 1979 Japan released their third album Quiet Life, produced by John Punter of Roxy Music fame. Quiet Life is like listening to Duran Duran without the guilt or Roxy Music without the wrinkles. In liner notes for a reissue, David Sylvain says "I still feel very attached to it – unusual for me. We reached a peak with this album – we knew what we were doing."

The album wouldn't get released in the U.K. until January and it has all the sounds of 80's style New Romantic classic.  Gone for the most part are the Glam rock stylings of the first two albums. This is the future. Sylvain may get the spotlight but Mick Karn's fretless bass steals the show, especially on the B side. I wonder how many wild haired boys and girls first heard of the Velvet Underground thanks to this album's cover of "All Tomorrow's Parties".

Sez Sounds Magazine in early January of 1980":
You never know quite what to expect from Japan. In a seeming ceaseless quest for success, their short career had to date spanned at least four markedly different musical styles. And yet,  despite the often calculated, contrived nature of these moves, the band has never become victims of the changes...Quiet Life is already an album of the year. And this with the current twelve months barely 4 days old. Believe it.

Let's hear it for the pale boys!