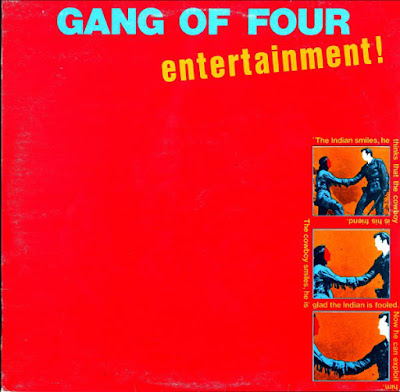 Gang of Four : Natural's Not In It
[Purchase]
One of rock criticism's intellectuals, Greil Marcus gave four albums his highest possible score in the Village Voice critics poll. Gang of Four's Entertainment! shared the honor with a live album from Public Image Ltd, the sophomore album from a Pittsburgh bar band and London Calling. He was so blown away the first time he saw Gang Of Four he left the club before The Buzzcocks took the stage so the effect would last longer. On his website, you can read his take on Gang of Four:
In almost every song, you can hear a very specific struggle: the struggle of the person who has heard the bad news to love it. He always fails. He realizes everything he does is second-hand, a waking dream, a dream someone else has dreamed for him—when he walks into a pub and greets friends with a line he’s half-consciously lifted from last night’s sitcom, he’s an advertisement. He hears himself and he feels tricked, humiliated, so he smashes into his friends, into the other members of the band, as if he’s never seen them before but knows they mean him no good. Screaming, he insists that he’s happy.
ALBUMS
Gang of Four: Entertainment! (Warner Bros.) 15;
Image Publique S.A.: Paris Au Printemps (Virgin import) 15;
Iron City Houserockers: Have a Good Time (But Get Out Alive) (MCA) 15;
The Clash: London Calling (Epic) 15;
Carlene Carter: Musical Shapes (Warner Bros.) 15;
X: Los Angeles (Slash) 5;
Roxy Music: Flesh + Blood (Atco) 5;
Black Uhuru: Sensimilla (Mango) 5;
Robin Lane & the Chartbusters (Warner Bros.) 5;
Dire Straits: Making Movies 5.
SINGLES
The Beat: “Twist & Crawl” (Go-Feet import 12-inch);
J. Geils Band: “Love Stinks” (EMI America);
Tom Petty and the Heartbreakers: “Refugee” (Backstreet);
Blondie: “Call Me” (Polydor 12-inch);
The Clash: “Train in Vain” (Epic);
Red Crayola: “Born in Flames” (Rough Trade import);
The Beat: “Stand Down Margaret (Dub)” (Go-Feet import 12-inch);
Delta 5: “You” (Rough Trade import);
Tommy James: “Three Times In Love” (Millenium);
Anemic Boyfriends: “Guys Are Not Proud” (Red Sweater).
at 2:00 AM