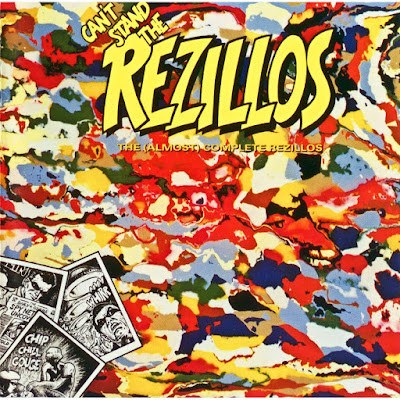 On July 21, 1978 the melodic Scottish power pop band, The Rezillos, released their debut album Can't Stand the Rezillos . "Top of the Pops" ( a UK Top 20 hit) and "Can't Stand My Baby" are usually selected as the highlights, but I'm digging the detuning bass line on "Flying Saucer Attack".

The NME's Paul Morley described the album as "13 quick cuts lustily shot through with cheap culture combinations ... The group's inventiveness does things with noise that are a little too clever for hippy-happy exhilaration; there's no chance of any calculated innocence here ... But it's all very clever: the parodied dissatisfaction of punk; the lashings of beat and controlled chaos; the frenzied passion of the production, and, above all else, lots of cosmic vibes, maan."

Ian Birch of Melody Maker said, "There's no need for worried glances: the band have pulled the proverbial cat out of the bag. They have always been about wraparound, cartoon strip enjoyment and that's exactly what you get. Both sides seethe with great pop bluster which has been captured (as it should have been) in all its rough-edged immediacy."

Nick Tester of Sounds stated that the album was "a definitive slice of the Scottish beat combo's past and present in full unabridged glory... No flabby excesses, the Rezillos stick 'wisely' to their ultra confident and rigid style, a format which sweeps through both sides with little hesitation or respite."