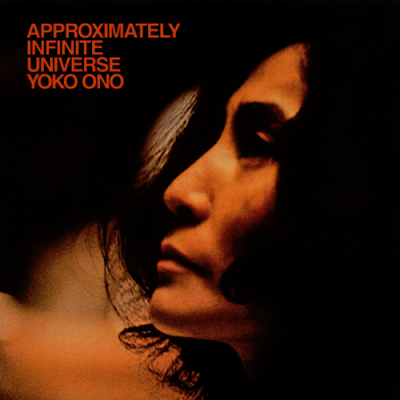 "I enjoy the B-52s, because I heard them doing Yoko. It's great. If Yoko ever goes back to her old sound, they'll be saying, "Yeah, she's copying the B-52s."
-John Lennon to Playboy Magazine

This. Is. Why. I .Do. This. Blog. To pluck the transcendental among the sloughed off. Approximately Infinite Universe, released January 8, 1973, is one of those treasures,

In 1980 the kindest critics congratulated Yoko Ono for keeping up with her husband on Double Fantasy. But back in 1973, she surpassed him ( and his Mind Games) by combining the experimental avant garde and feminist screeds with the more approachable pop. Mick Jagger, who plays some guitar on the album, reported to friends that Yoko is "really trying to sing properly. She's not singing. She's really trying to sing".

Not that the critics got it. In his review for Rolling Stone Magazine, Nick Tosches absolutely trashes the double album:

Is that shit or is that shit? I mean, is there any need to dissect and discuss the faults of such schticks? The beatnik poets on Perry Mason used to write better stuff, for Chrissake.

To which I say: just listen.

This is music that sounds like it came out last week.

Yoko recorded the album with Elephant's Memory who shine here far more than on Some Time in New York. John Lennon produced and plays guitar on two songs ( "Move On Fast", "Is Winter Here To Stay?") The single "Death of Samantha" inspired the name of the 80's Homestead band.


The ironic footnote is that once DJ's got an opportunity to remix and update Yoko's songs they became dance club hits. In 2011, the year Yoko turned 76, "Move On Fast" hit #1 on the dance charts, her sixth consecutive chart topper.