40 Year Itch : Back From The Abyss 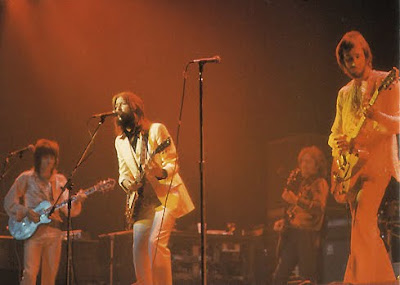 "It really wasn't difficult to get people to help. In fact, you might be surprised at a few names I could mention who would have given their right arms to join in this band."- Pete Townshend


On January 13, 1973 Eric Clapton headlined a pair of charity concerts at the Rainbow Theatre in London. The real charity might have been Clapton himself. Three years deep into his heroin addiction, Clapton had been seen only once since Derek and the Dominos dissolved. At George Harrison's Bangladesh bash.

It was Pete Townshend who got Clapton back on stage where he fronted--with little in the way of rehearsal-- an all star band that includes Stevie Winwood, Jim Capaldi and Ronnie Wood. The resulting live album is ragged, almost lifeless.

"Rainbow Concert presents some of the best people in rock at their most egoless and supportive. But the crucial question — is Clapton able to come out of isolation and return to his music and to the people who care about it? — remains unanswered."


But critical reviews aside, Clapton admits Townshend saved his career and possibly his life: "I did that very much against my will. It was purely Townshend's idea. I'm indebted to him."

And things would get much better from here on out, beginning with the sensational 461 Ocean Boulevard.
at 2:00 AM