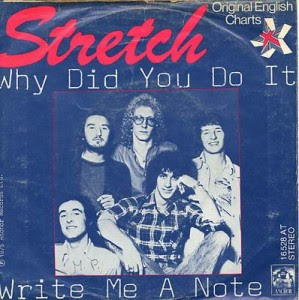 Stretch : Why Did You Do It

Here's a great song with an absolutely bizarre back story. Stretch is made up of UK musicians who impersonated Fleetwood Mac on a US tour assembled by Mac manager Clifford Davis. Davis said he owned the band's name and with Bob Welch look-a-like "Elmer Gantry" fronting the band, it probably took audiences a few minutes to realize this wasn't the band they'd paid to see. Eventually they booed and jeered and the musicians returned to the UK upset and angry enough to put out this single addressed to Davis:

I've been thinking 'bout what you have done to me
The damage is much deeper than you'll ever see
Hit me like a hammer to my head
I wonder were you pushed or were you led?

The funky single peaked at #16 in the UK and, to these ears, inspired the 1976 Climax Blues Band smash "Couldn't Get It Right".