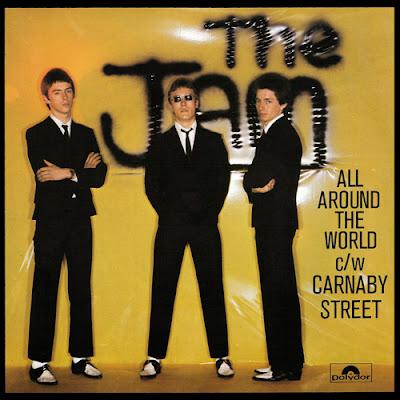 The Jam : All Around the World

On July 8, 1977 The Jam released their second single, the U.K. #13 hit "All Around the World". The rocker hit record stores just six weeks after the Jam's debut album, but it didn't come from the In The City. It was a brand new tune.

Weller was given the opportunity to review the single for Record Mirror and he raved about it like a teen age fan:

I was hoping for 'Modern World' as the new single from The Jam. I love them. Seen them play about 15 times and this is no disappointment. In fact they make records that sound like anthems Weller's guitar explosion in the middle is like a quick journey to the centre of the earth. Single of the week and number one. 'Carnaby Street' is on the B side.

Introduced above as "JAM" by Marc Bolan, Rick Buckler loses his drumstick at the 2:21 mark.

There was no second take either, so once it was filmed that was it. And I still don't know what happened to that drumstick. Maybe it's still there because I don't remember it coming down.