In Love With Massachusetts 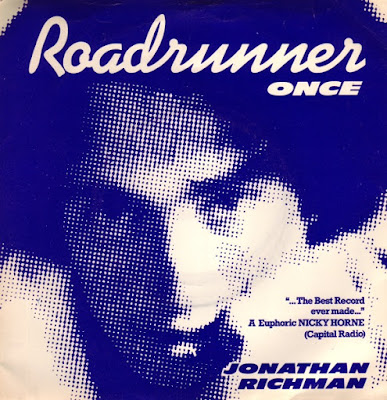 On July 10, 1977 Jonathan Richman's "Roadrunner" , the world's greatest driving song, entered the U.K. charts at #33. It would peak at #11. There are at least three versions of "Roadrunner" worth discussing. There is the 1972 John Cale produced original Modern Lovers version which I would like to call "Roadrunner (Once)". There is the UK hit version, recorded with Bezerkley label mates The Greg Kihn Band in 1974. That's "Roadrunner (Twice)". There is also "Roadrunner (Thrice)", an eight minute live version that was released as a B side in 1977.

In any case the tune conjures up some memories of driving through New England towns in the dead of winter. Boston is still a city I don't know so well. Can we feel nostalgic about a place we've never visited? I think the answer is yes.

When Top of the Pops couldn't get the now acoustic Jonathan to perform Roadrunner on their show, Legs and Company slapped together this silly dance routine.