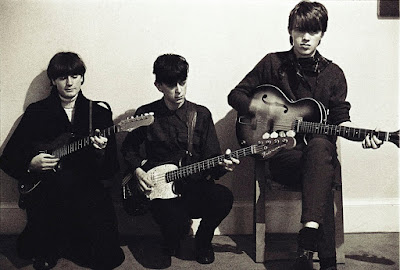 On February 1, 1980 the Glasgow band Orange Juice released "Falling and Laughing", their debut single and the first release by Postcard Records. Melody Maker named it Record Of the Week. Robert Forster of The Go-Betweens remembers hearing it for the first time in his memoir Grant and I:

The record didn't sound like an indie single of the time, particularly those from London, which tended to be drilled and tight. This was not that--there was a demo-ish quality to the recording as the band shifted through an unusual set of influences, including funky bass lines and country and western guitars. Riding high in the mix was the singer, his heartfelt croon pushing the boundary usually held between listener and vocalist, and a lyric that added a new word to the rock lexicon, "Consequently".

"None of us drank alcohol at the time," singer Edwyn Collins would say later. "Orange Juice seemed perfect because that's what we drank at rehearsals."  In contrast to the dark overtones of their contemporaries, and things would get very day in 1980, Orange Juice played happy, wholesome love songs with a sound inspired by late-era Velvets, early Talking Heads and Chic.

The thing about us blending Chic and Velvets, it sounds really audacious on paper, but if you listen to Live 1969, the double-time rhythm guitar on "Rock and Roll" is not a million miles apart from Nile Rodgers's guitar playing in Chic. Very clipped. Not jangly, which is the cliche journalists always applied to Orange Juice. The strings are actually being damped, so it's more choppy than jangly.

The single was only partially financed by the band's friend, Alan Horne, who decided he would be both the manager of Orange Juice and the man in charge of Postcard Records. Taking cues from punk-era managers like Malcolm McLaren, Horne tried to use intimidation to get Orange Juice on the charts.

He once ambushed John Peel, handing him the single “This is Orange Juice, from Glasgow. All those Manchester bands you play, it’s all a nice bore.”  and warning him that Postcard Records was "the future and either you'll get wise to that or you'll look very stupid". Peel played "Falling and Laughing" only once on his show. 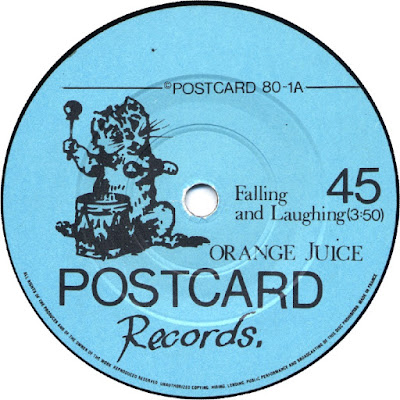 Orange Juice ushered in a new era of life affirming pop ( inspiring bands like Haircut 100, The Bluebells, and Altered Images). Postcard added more bands to its label including Aztec Camera, Josef K and The Go-Betweens, while turning down Claire Grogan's Altered Images.

"The Sound of Young Scotland" became the label motto ( never mind the fact that the Go-Betweens are from Australia). They had become the most trendy label in the land but would Postcard become a hit factory?

No. By the Summer of 1981, after a flurry of 14 releases, the label would end. But the singles have all become rare and valuable collector's items.