"Noise can be musical and beautiful. Once you commit to tape or disc format you've changed the presentation; why not take it as far as you can. Vibrating a bunch of guitar strings is an effect, after all. Layering various textures puts a kind of depth to the record...I dig that." -- James Lowe, lead singer, the Electric Prunes

"The Great Banana Hoax" is the lead off cut to one of the great albums from one of the greatest years in rock, 1967's Underground.. What is the hoax? Back in '67 word got around ( with the help of Donovan's "Mellow Yellow") that people could get high by smoking banana peels. Even Time & Newsweek wrote about it. The FDA put their best scientists on the case.

They discovered there are chemicals in the banana peels called serotonin and norepinephrine that are related to hallucinogens such as LSD, but not enough to get you high. All the people who have smoked banana peels say it doesn't get them high, only headaches

Though their roots were pure garage, The LA based Prunes experimented like mad scientists in the studio. That motorcycle revving up that you hear at the beginning of the song is actually a slowed down growl, meant to evoke the sound of moving furniture. The percussive effects at the end are done with an African kalimba. 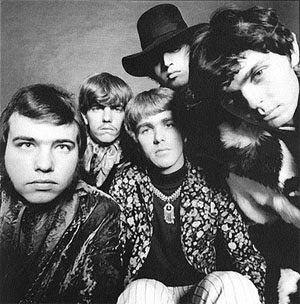 This week bassist Mark Tulin, who also worked briefly with Smashing Pumpkins, died at the age of 62.

Billy Corgan paid tribute to Tulin via a blog post on Glittercop.blogspot.com, stating : “Mark was part of a movement of suburban kids in the mid to late 60s that changed the world with their dark musical dreaming, and of course their Anglophile obsessions. From their imaginations sprang so many technicolor daydreams and all manner of wishing; wishing that we were often what we are not,” before concluding, “God Bless you Mark, you will always be a star”.