With a blast of feedback and no apologies to The Out of Our Heads era Rolling Stones, french rocker Jacques Dutronc is a misanthrope...but a responsible one. 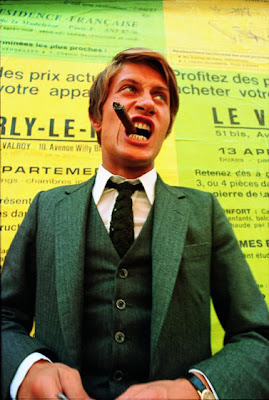 In the mid 60's Dutronc was a huge rock star. My stepmother, growing up in Switzerland, said all the schoolgirls had the biggest crush on Jacques. He kept his eyes and ears focused on what was happening in England at the time and, whether it was garage rock, Kinks-like pop or psychedelia he could translate it into a French hit. But he wasn't the only one borrowing riffs and ideas.


Finally, Dutronc gets name-checked in one of the best songs of the entire 90's, Cornershop's "Brimful of Asha":

Jacques Dutronc and the Bolan Boogie/
The Heavy Hitters and the Chichi music.

Dutronc married french singer Francoise Hardy in 1981. He's an actor of note, having won the French Academy Award, the Cesar for his role in the 1991 film Van Gogh.

Clearly an artist who deserves more than a cult following.
at 1:32 PM