That indescribable sound of Toyah 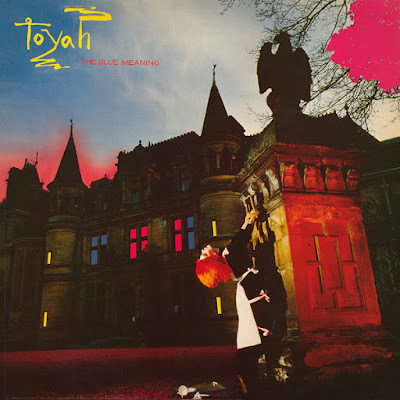 On June 6, 1980 Toyah released The Blue Meaning, an album that would top the UK Indie charts. Fronted by the multi-color haired Toyah Willcox, who played Monkey in 1979's The Who album-inspired Quadrophenia and acted beside Kate Hepburn,  the band had already scored a UK#1 Indie single with "Victims Of The Riddle"and expectations were big.

The album, now considered a cult classic by some, peaked at UK#40 on the mainstream album charts. The band would soon break up.

The articles I've read about Toyah Wilcox from that time don't reveal much, but in 2017, she was interviewed by BBC Radio for their Inheritance Tracks segment and we learned she had strict parents who, when she was very young, made sure she was in bed by 6:30 at night, not to be seen again until 7 AM the next day. Her mother picked out her clothes. She was dyslexic, number-blind and club-footed, and she determined to be seen and heard:

When I became a punk rocker and was making my own clothes and my hair was every color under the rainbow my mother used to ask me to walk on the other side of the road. She just couldn't bear being seen with me. People would shout insults and go "What's wrong with you, lady" and "Are you a clown today?" My mum didn't want any of that but as soon as I started having recognition, my mother saw why I was doing it and why it was the only thing I could have done because I was never going to be a model. I was never going to find my way being in front of the camera by just relying on being female and so she became immensely proud of what I did and understood it. 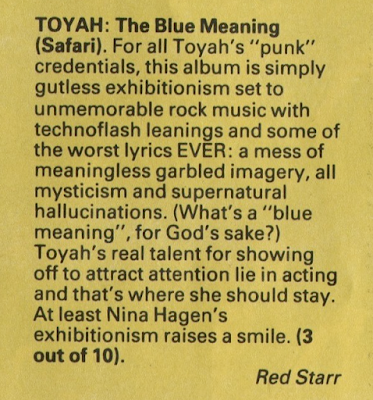 The track "Spaced Walking" is notable because of the odd helium-induced vocals:

Steve James, Keith Hale, Gem Howard and I were messing around in the Marquee Studio at about 2am and Gem ordered a large cylinder of helium gas because he thought it would be fun. So Gem and I were in the vocal booth with Steve and Keith in the mixing studio and we were just messing about. It was improvised, Keith was on keyboards, I remember Gem having a spanner to open and close the gas valve every time I needed to fill me lungs."The Helium Song", a b-side from this period, was simply an extended version of "Spaced Walking" with a longer introduction, and a proper ending - the album version simply fading out.

In 1986 Toyah Willcox married Robert Fripp. Their shelter-in-place videos have been one of the highlights of this strange and difficult era.