Who Is Klark Kent? 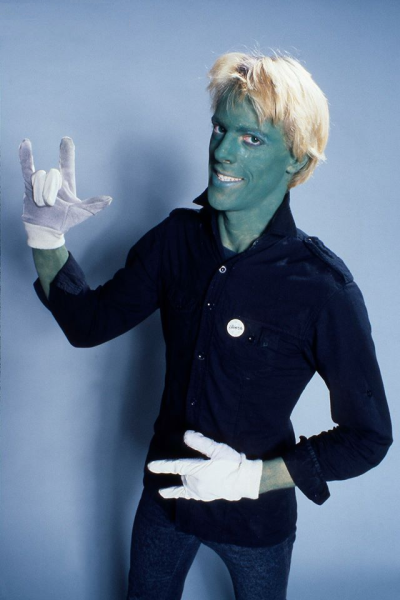 Klark Kent : Away From Home

In the Summer of 1980 the mysterious Klark Kent released an eight-track self-titled mini album on green vinyl. After the band's appearance on Top Of The Pops performing "Don't Care" in 1978, everybody knew Kent was Police drummer Stewart Copeland's alter-ego. Copeland plays all the instruments. But the charade continued.

“Klerk Kant”, as appears to be his name, first came into my life as he was sitting next to me on the Concorde flight from Washington, D.C., to London. Speaking in what he claimed to be his native Sanskrit, he explained that he had been in Washington testifying before a congressional committee on church politics. His expertise in this subject had been attained while studying in a Moslem seminary in India. He underlined his religiosity (he claimed to be a “Sufi”, a kind of Islamic mystic that is rarely seen on the Indian sun-continent) by saying his noonday prayers in the aisle of the jet air-plane, jostling the stewardesses as they were trying to serve lunch, and annoying the passengers with his shouts of “Which way is Mecca? Which way is Mecca? Which way is Mecca?” while shifting his body to accommodate to the turns in the direction of the aircraft.

Later, he confessed, in sub-standard broken English, that he was “a mere computer programmer”, currently out of work but living on the sum of one million four hundred thousand dollars which he had won from I.B.M. in a successful suit against the company for stealing his “invention”. He was most secretive about the invention (“Do you want me to sue you? he asked coyly when I questioned him about it), but he adumbrated the notion that it had to do with capturing radio signals from distant galaxies, systematizing them through computer analysis, and reducing them to simple melodies which he played on the various instruments on which he is proficient.

I saw a great deal of Kent over the following weeks, sometimes in his elegant suite at the Dorchester and sometimes at my more modest digs, a bed-sit on Grosvenor Square. Sometimes he was morose to the point hostility, barely replying to my concerned questions with monosyllabic grunts. At other times, he was almost euphoric, waxing eloquent on his wide-ranging political philosophies. He would often descend to the vernacular, but his normal mode of speech was iambic pentameter in a-a-b-a rhyming pattern in which he produced perfectly worded, poetically beautiful expressions of deep moral intensity. (“I am a child ancient Syria / Suffering the pains of all this area” is an example.)

It is this peculiar combination of the profane and sacred which gives his music its unique appeal to young and old, simple and sophisticated, bovine and leontine, illiterate and intelligent, A/C, D/C, and A/C/D/C I, for one, like the underlying jazz sub-motif. My sons, being of primitive mold, see nothing in him but what they call “white collar punk”. In any case, to one and all, Klerk Kant’s music is the work of “true genius come home from a visit to the cosmos”, as the New York Times critic says. The eight songs of the disc run the gamut of KK’s extraordinary talents.