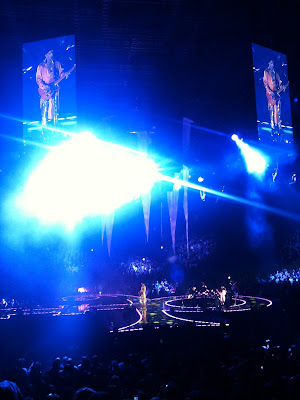 On the last night of what must have been an exhausting tour, the purple gnome played a predictable set that, even with two encores, timed out shorter than a Winnie The Pooh movie. Maybe he was in a bad mood. Maybe was feeling that short-timer thing. Maybe he had a bad case of the Muhnnnn-Days.

Prince failed to sell out The Tacoma Dome. My wife and I bought cheap seats and got moved up to Row 25.
Wearing a black doo rag, high heeled shoes and several pounds of silver jewelry, Prince emerged from a smoke screen playing "Let's Go Crazy" followed by "Delirious" and "1999". The crowd went wild. He would also play "Little Red Corvette", "Raspberry Beret", "When Doves Cry" and "Kiss". Prince's guitar work reportedly made Pearl Jam's Mike McCready drop his jaw.  Yes, at times we were in the presence of a master showman.

Then there were other times. He brought 68-year old Maceo Parker out  a few times too many to show us all what a sax can do. Is this not a too obvious attempt to grab the "King Of Soul" scepter from James Brown? Some of his supposed ad-libs ("You don't have to watch Dynasty ...or Real Housewives" from Kiss) were at least part of his Vancouver act. And when he sat down at what looked like a piano, it appeared instead that he was playing a karaoke machine ( for "Alphabet Street" and "I Would Die 4 U"). What's worse? Lip-syncing to real instruments or singing karaoke? Finally he made the classic "old and in the way" speech about radio play: "You want to occupy something? Let's occupy the radio stations" before launching into an over-the-top rendition of "Nothing Compares 2 U".

After two brief encores of "Purple Rain" and "Controversy", the Prince had left the building. It was 10 PM. The lights went up but nobody believed the show could possibly be over. It was for us....and the people who had paid $200 for floor tickets. But not for Prince who  headed up to Seattle for an after party where he jammed with his band for 90 straight minutes.